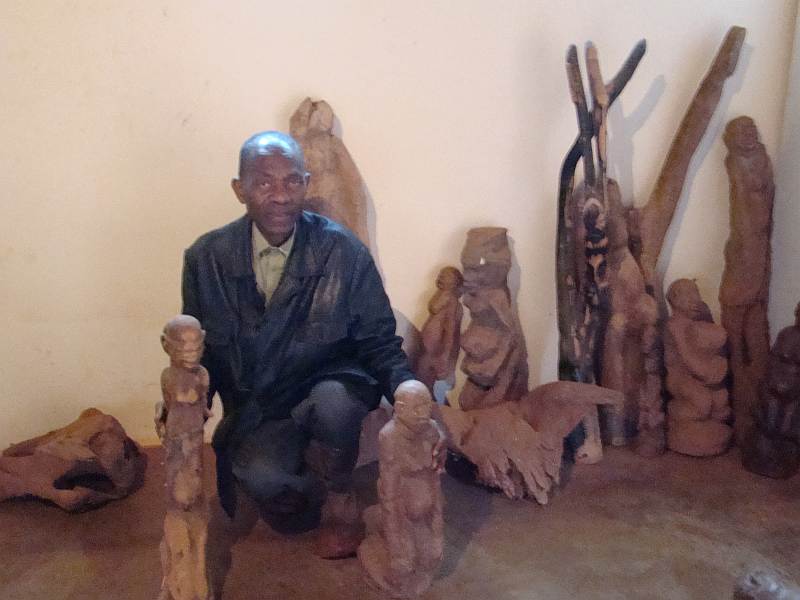 Churchhill Makondelela Madzivandila was born on the 9th September 1947 at a village called Tshakhuma in Venda, which is located in the northern most parts of South Africa in Limpopo Province. As a youngster he was sent to Nzelele Valley near Louis Trichardt to herd cattle. When he was in the forest, he came across some wild fruit trees. He found that some of these trees leaves were riddled by all kinds of insects. On close examination of these leaves he saw and was fascinated by beautiful designed shapes made by the insects. He observed shapes in these designs from human figures, animals, birds and many more that interested him. This phenomenon inspired Churchill to start drawing these shapes on flat rocks. Then he started carving these figures on wood such as yellow wood, Tamboti and others using iron tools with which to do so.

He also went to study on a tertiary level where he graduated with a teacher’s Diploma. Realizing his talent as an artist The Venda Government sent him to study at the school of art, called Indeleni in Durban and he later obtained an Art Diploma.

In South Africa Churchill has participated in a number of art exhibitions. The first artworks that he exhibited were at the Thohoyandou Hotel in Venda during the eighties. Other places where he exhibited his works include Polokwane, Johannesburg and the University of Stellenbosch in the Western Cape where one of his major artworks still resides to this day.  Some of his best artworks have been bought by major corporations such as Sasol, one of South Africa’s fuel giant companies, and can be found at their head office.

In 1995 he participated in a group exhibition called ‘Art from South Africa’ at Denhaag in the Netherlands and in France and also Amsterdam. In Amsterdam he visited many museums that inspired him even more, such as Van Gogh, Rembrandhuis, Anne Frankhuis, Theatre and Bijbels Museums. In 1996 he participated in another group exhibition in Belgium at Michelen. In 2004 he exhibited in Los Angeles and in Switzerland.

At home in his village of Tshakhuma he has some of his finest art on view, where people can also buy on site. The beauty about this is that one gets to meet the legend himself behind the great works of art in his village.