In 1993, around the time when Open Africa was conceived in the mind of its founder, Noel de Villiers, there were 97 websites in the world. By late 1995, when the organization was registered, the decision was made to move the initiative into the digital space by integrating Geographic Information Systems (GIS) technology with the web. Today there are over 800-million websites and GIS has become part of everyday life.

In 1996 a journalist from Getaway Magazine interviewed Noel for an article about Open Africa. At the end of it he asked what do you wish for now, to which the answer was given that with this dream’s ramifications so large, something really helpful would be to draw a map of what it entails. Not long afterwards the then head of what is now the WWF, Dr John Hanks, visited Noel de Villiers with a copy of the map in his hand. Saying he was sent by renowned businessman and conservationist Dr Anton Rupert, he professed enthusiastically that this ‘dream’ coincided exactly with something Dr Rupert had in mind regarding transfrontier parks. Following this discussion and soon afterwards Dr Rupert established the Peace Parks Foundation, in which de Villiers was one of the founding trustees.

Later in 1996 Noel approached late South African president Nelson Mandela to be the organisation’s patron, which he remained until his passing in December 2013. Open Africa’s first travel route was launched in 1999 in the Overberg Region of South Africa and over the next five years Open Africa expanded its vision and routes into Lesotho, Swaziland, Mozambique, Namibia and Zambia.

In 2007 the World Bank recognised Open Africa’s model as a tool to drive conservation and development in rural areas. This led to the expansion of the model in Zambia and Namibia through a four-year project. The model would again be recognised in 2013 by the Millennium Challenge Account (MCA) that supported the adoption of the model as a vehicle for rural development by the Namibian government.

Thirty years from now there will be a far greater global emphasis on the environment and wildlife than ever imagined. Africa could be uniquely placed to occupy a niche that could be the equivalent of the industrial niche many developed nations occupy today.

If you are already in Africa be aware that you have succumbed to a condition for which there is no cure. This is nothing new. It has puzzled many people for millennia. Some of them were great explorers (Livingstone), others famous physicians (Albert Schweitzer) and philosophers (Carl Jung). Way back in ancient times it had already been identified and given a name, yet to this day it has defied description. That is to say, nobody has ever been able to be precise about exactly what it is.

The symptoms are extraordinary. Your life will never be the same again. Those of us born here inherit the condition involuntarily. There is no escape, no known remedy. Others who come here, with few exceptions cannot resist the infection. 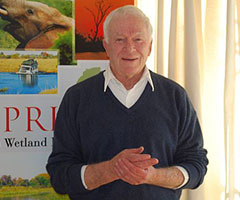 You have always been aware of nature, but in this condition the environment becomes dominant. The sun, the same sun that has tracked your every footstep in life, takes on a new aura, becomes awesome – as if you’d never noticed it before. The scope of your vision changes. You become preoccupied with distance, far horizons. At the same time you notice small things, subtleties that previously seemed irrelevant – shades of colours become more noticeable than colours themselves. Your hearing intensifies. Mechanical noises offend you as never before, you detect melodies in the trickle of a stream, hear voices in the rustling of leaves by the breeze.

The things you do in life become less important than the things you see, feel, and can touch. You find yourself behaving peculiarly – whispering in the presence of animals, stroking plants. Your spirit becomes detached, as if it wants to linger and be unhurried. Deep emotions are stirred within you. You laugh more easily, yet a sunset can bring tears to your eyes. Your values change. Mountains become friends, valleys pastures for your soul. You feel a constant urge to get out, to walk, to be free.

You meet people and interact with cultures that are totally removed from your own, yet that seem strangely familiar. You become more inclined to listen than to talk. A yearning develops within you, a longing that is at once satisfied yet never saturated. You feel compelled to come back again and again, and each time you do so the experience is somehow deeper than before.

In the African bush, far away from the surroundings you are accustomed to, you feel as though you have come home. Some say this is because your spirit recognizes the birthplace of its origin, others say it is because of the silence, because of the overwhelming presence of a creator. But nobody really knows. There is the grandeur, splendour, vastness, and remoteness that can be explained; the beauty, abundance of birds, animals, plants, and flowers. But beyond that there is something that defies description either by adjectives or expletives.

This something is the mystique of Africa and the malady to which you have succumbed is what was called mal d’Afrika by the Latins many centuries ago. These days the French call it mal d’Afrique.

It is said that there is a time and a place for everything. Africa never partook in the industrial revolution, nor the technological era. Largely it was left behind by the developments of the 20th century, the same century that in bringing great wealth to many nations, damaged the environment so alarmingly and caused such fatigue to the spirit of humans. Now an interesting situation has developed.

Africa’s great nature resources coupled with its shortage of cash on the one hand, is balanced on the other against the wealth and desire of the people in the advanced countries to be reconnected with nature, with themselves and with their roots. Each has what the other needs, and this at a time when the circumstances in which to make a fair exchange could hardly be better. Non-stop flights in wide-bodied jets from almost anywhere at reasonable prices are no longer a novelty.

The only question is how to make the exchange ‘fair’. Mal d’Afrika after all is not for sale. One can experience and be captivated by it, but not own it. There would be no point in swapping cash for culture, heritage for hedonism. It would be a tragedy if the specialness of the African environment were to be consumed rather than consecrated, for it is the last of its kind that is left. It could with proper management and care become the saviour of Africa and its people, the resource and characteristic that will mark the place of this continent in the global community.

The key to the answer is balance. Most people know that and many are striving toward its accomplishment. It is this striving that has led to the founding of Open Africa. It envisages heralding an environmental epoch in which development is based on the sustainable use of inherent natural and cultural resources. There are many good reasons why this is worth striving for, not the least of which is that the whole world may succumb to mal d’Afrika.