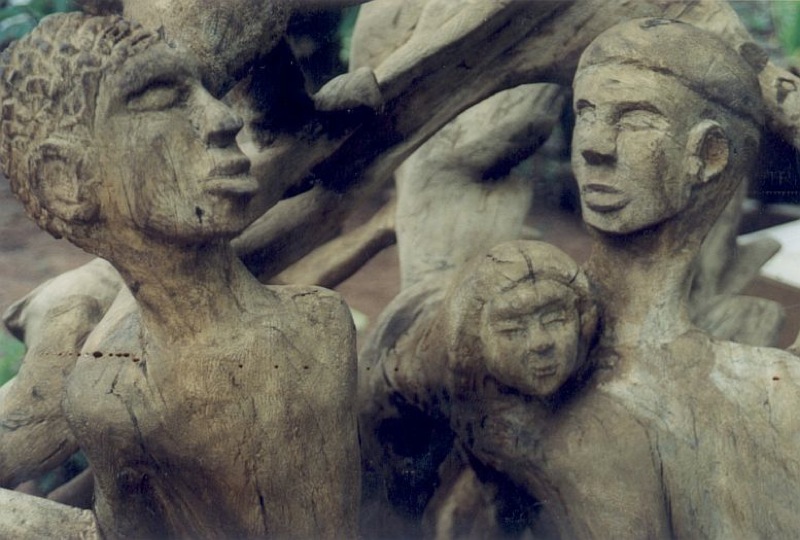 Noria was born in 1938, in Giyani – Xigalo Village. That year there was a big initiation school for girls,Tshikumbana, where you sit in the bush for six months and you cannot go home.

“The day I was born was very special, my mother’s sister also gave birth to a son Matumba, and the chief’s wife at the same time gave birth to Makone, the future Chief who later married Matumba when they grew up”. In other words Noria Mabasa is of royal decent.

Noria became very sick and had a dream of an old lady teaching her about woodcarving and pottery.  She refused to learn until 1975 when she started clay pottery and the following year in1976, she started woodcarving. The dream “I dreamt of a wooden log floating on the water and after waking up, went to find the log and started carving it,” and that is how her woodcarving career came about. Some of Noria Mabasa’s major works include pieces on display at the Union Buildings and what she calls Ngoma Lungundu.

This is the complex in Pretoria that houses the executive arm of the government both now and as it did in apartheid South Africa. During 1956 thousands of women travelled from all parts of South Africa to the Union Building and gathered at the lawn to hand in a petition declaring their refusal to carry Dompas (apartheid ID book for black people). This was the largest protest action ever by women against apartheid policies and to commemorate it Noria was commissioned to sculpt the work of art that is now on display there.

The sculpture took nine months to carve and another five months to sand down. It consists of fourteen women and one man. Noria describes the man as an employee running away from the crowd of women. He represents everything the Union building stood for in apartheid South Africa, the power and the brutality of the apartheid state.

The sculpture was purchased for the nation in 2002 and placed in front of the Union Buildings in Pretoria.

Noria Mabasa has produced two pieces, which she calls Ngoma Lungundu, which is the magical Drum of Thunder, Drum of the dead or Drum of Mwari.Noria explained the legend of the drum as follows:

“When the Singo people migrated south from Zimbabwe to what is now known as Venda, they carried the drum. The drum was enormous and had to be carried by many men. It was not allowed to touch the ground and it was believed to be filled with medicine and magical powers which protected the people from their enemies. Human arms were used as drumsticks to beat on the human skin covering. According to tradition, as long as the drum was continually beaten during the time of threat, it would help to defeat the enemy and protect the people”.

The drum struck fear into the soul of enemies to the extent that they fled in terror, fell to the ground in a swoon ‘as in death’ or actually died. If they stopped beating the drum or allowed it to touch the ground, the Singo would be vanquished. It is said that it was the power of this drum that enabled the Singo to undertake their journey and occupy and hold the land to the south of the Limpopo River. “At times the power of the drum was so great that it would appear to play itself.” One of these sculptures is on display at the Standard Bank Collection of African Art at Wits University, Johannesburg.

Noria Mabasa’s clay pieces and carvings reflect the rituals and traditions of the VhaVenda people, as well as the Shangaan and Zulu cultural traditions present in the communities of the region. Many of her works show women dressed in traditional clothing, and the details in the style  of dress, beadwork and other adornments that she uses are significant. These fine points portray the status of the character she is depicting. In VhaVenda culture, certain items of clothing such as the shedo relate to the initiation schools. Noria explains how important initiation schools are for her.  This was the only schooling she received, and its influence is mirrored in her work. In order to interpret her work and to have an understanding of Noria herself, knowledge of the initiation rites is of great importance.

“In indigenous southern African cultural traditions, women are generally considered subservient to men. However, in Venda, women do not necessarily share this inferiority” says Noria. Within her own courtyard (muta), a woman is in charge.  Women are allowed to own property, which is usually given to them by their fathers or inherited when there is no male heir. Noria is the head of her house-hold, owns her property and is respected by family and community.

Nevertheless, there are still many areas of daily life in which a Venda woman’s position is inferior to that of a man. Women are still expected to perform basic duties such as cooking, cleaning and drawing water.

Traditionally, a Venda girl is expected to attend three major initiation schools before marriage: the vhusha, which takes place at puberty school; the tshikanda, an intermediary school designed to reinforce the lessons of the puberty school, and the domba, a pre-marital school for young women.

The development of the individual is seen as a series of distinctly separate stages: puberty marks an important stage and marriage another. Transition from one stage to the next is made possible by external forces (such as the ancestors, both good and evil spirits and witches, who can exert good or bad influences on people’s lives). The role of the initiation schools is to instruct initiates about what to expect and how to behave in the next stage of their development. By performing ceremonies and dances, the initiates are enabled to break with the mistakes of the past and to embrace the challenges of the future. These ceremonies also invoke the support of the ancestors and strengthen the initiates through magic.

Vhusha is  an eight-day course held at an initiation lodge where girls are kept in seclusion and are taught that the essence of Venda womanhood is humility. Initiates are given extensive education in matters relating to sex, sexual behaviour, betrothal and marriage, with emphasis on avoiding pregnancy outside marriage.

They are taught to sing, dance and learn the milayo, a combination of everyday lessons and cultural symbolism. Noria explained that knowing the milayo endows her with special knowledge and entitles her to participate in women’s special meetings and ceremonies.

The intermediary’s school, the tshikanda, takes place at intervals of three or four years, just prior to the holding of the final school, the domba.