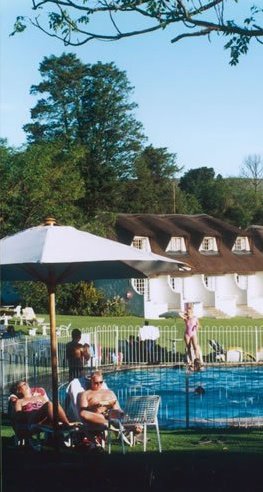 The Nest Drakensberg Mountain Resort Hotel from 1855 to today!

The Nest has always been rich in history and adventure. From around the late Iron Age the Bushmen painted eland and other images on the walls of caves – from the Sebaaini Caves to Anton’s Shelter – and continued to do so through the early Voortrekker days.

On 21 September 1849 David Grey of Cathkin in Scotland left with his wife and four children on the barque Aliwal for Port Natal (Durban). In 1855 he moved to The Nest on the Voortrekker Farm bought from Opperman, which stretched well into the Drakensberg. It was he who named Cathkin Peak after Cathkin Braes in his native Glasgow.

During the Langalibalele Rebellion in April 1874 rebels rushed into the house and stabbed their sons,  David (29) and Walter (15), before David Grey senior fired a shot through the veranda post. The rebels bolted and luckily David and Walter recovered.  The homestead on The Nest was however burnt down that night.

On 24 January 1900, close to The Nest in the area known as Spioenkop, a major battle erupted during the Anglo-Boer War – known as The Battle of Spioenkop.

In 1933 Leslie Forbes Gray opened a guesthouse in the re-built farmstead, and in 1943 the present hotel was built by Italian prisoners of war. In 1963 Theodore Haug took over The Nest Hotel and ran it for 16 years. The Malherbe’s ran it thereafter for 9 years.

In June 1988 Willi and Veronica Germann acquired The Nest Hotel and the adjacent farm and are delighted to be your hosts in this scenic, beautiful and historic part of KwaZulu-Natal in the very heart of the Drakensberg.

November 2000 saw the formation of the Ukhahlamba Drakensberg World Heritage Site. The area was awarded this status by Unesco in recognition of the brilliant natural and cultural  excellence which should be preserved for future generations to appreciate.