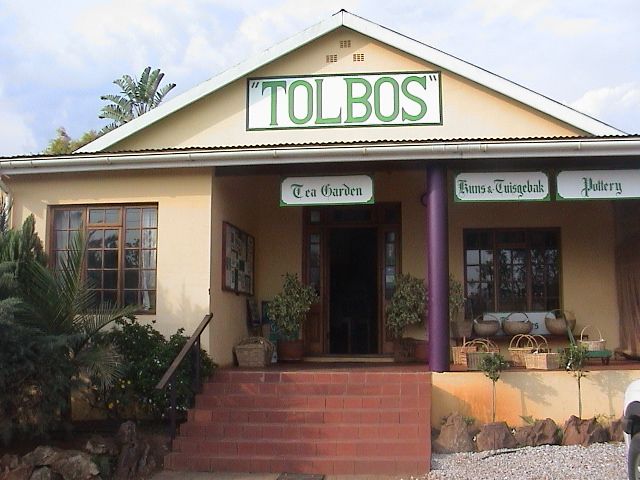 Tolbos is known for its homely hospitality and good old-fashioned value. Local citrus products from surrounding farms are available, as well as crafts, pot plants, glassware, jams, cakes, pies, curios and pottery (meticulously crafted by Toska). Widely considered the information centre of the Patensie region and outer perimeters, Toska and Hetsie will gladly give travellers guidance and direct visitors to the pristine places in the surrounding region.

Tolbos can cater for large groups with prior notice.

Toska was looking for a place to sell her pottery and Hetsie was looking for a place to do needlework. They then applied for a ‘tuisnywerheids’ license (home industry) with the municipality at the time. The problem with that municipality was that no one that applied for a license had been successful as the mayor was also the general manager of the only shop on the main street of Patensie – there was a monopoly that was unbreakable. After a long wait they received their license, and on it was clearly written that only locally produced goods could be sold from the shop. They were very thankful, and immediately started looking around for premises. It was almost impossible as every existing building on the street belonged to the same organisation. We did manage to get a farmhouse just outside of town behind the rugby club’s pavilion.

But how do you begin a shop?

There must be an opening. At the time Hetsie had an uncle in parliament that she invited and he said he would help officially open the shop two weeks later. Toska and Hetsie sprang to work – painting, putting up burglar bars and tending the garden. Flyers were handed out and the entire community was invited.

So that is how Mr Kobus Meiring, the minister of foreign affairs, opened Tolbos on the 17th of August 1988. They made history as they were the first other business in Patensie. The local people supported them tremendously, but they soon realised that they needed more people to come into the shop if they were to survive. And that is how they began with GAMTOER – they opened an agricultural route that was open every second weekend and people could visit farms, enjoy meals there, have tractor rides …. a real farm experience! But, just like everything, it took time for people to get to know about the route, as Gamtoos was not well known at the time at all. Unfortunately some of the farmers lost interest, and Gamtoer slowly faded away. At Tolbos they started marketing the route as more of an attraction for during the week, and encouraged bus tours to visit the Gamtoos Valley during the week. They took tours to the citrus packing house, tobacco co-operative and farm visits with meals. For this promotion Tolbos was awarded a certificate by SATOUR.

During this time, Toska and Hetsie also realised that Tolbos was too far off the main road and in 1993 they bought a piece of open land from the municipality. It was the best decision made – being on the main street, everyone passes Tolbos as they come through Patensie. They have never tired of marketing the valley. They also decided to concentrate on the Baviaans, as the early nineties was the beginning of the 4×4 mania. At that stage the Baviaans was totally unknown. When they did their first tourism brochure for the Gamtoos Valley and the Baviaans, they contacted everyone on the route to find out whether they had any input. It was great to work together with everyone.

“We also realised that everyone is dependent on each other. Those were years of struggling and growing, but today we’re thankful that we pushed through, endured the criticism, because it’s now going well and we can recommend any places on the route to tourists with confidence. We are very proud to be part of the Baviaanskloof Mega-Reserve.  We believe that we will always be involved with tourism as it’s in our hearts”.