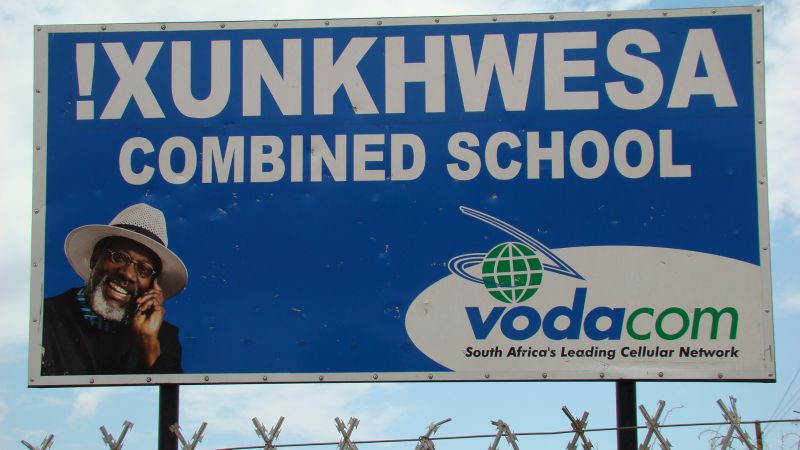 The school was started in 1990, when Namibia became independent and the South African Defence Force relocated the !Xun and Khwe people to a tented camp near Schmidsdrift in the Northern Cape. Tents were thus used as classrooms when the school started. Very often teaching and learning was interrupted by elements such as wind, rain and hail storms. Despite all these harsh and sometimes inhumane conditions, the school remained fully functional and learning became an integral part of the San people.

In 1994 the ‘tent classrooms’ were replaced by corrugated iron structures. In November 2003 the !Xun and Khwe people were relocated to Platfontein were a proper school was built. Today the school boasts a modern computer laboratory and it’s own library. Access to the library is extended to the local community as well. These new facilities afford learners with the necessary skills to hopefully find work after they matriculate.

The school has an enrolment figure of close to a thousand learners. Learners are also provided with a much needed meal at the school on a daily basis, funded by the Northern Cape Education Department.

Learners are encouraged to participate in extra-mural activities which compromise both cultural and sporting activities. The traditional dance group regularly performs at important provincial and national events. They also participate in both provincial and national competitions that are held annually for learners, and have won various certificates, merits and trophies in this discipline.

All travellers are welcome to visit the school and share in the learning experience of the !Xun and Khwe learners.

The Kimberley Diamond Route is a route developed prior to the Footprints of the San, but in the same geographical vicinity of Kimberley as the !Xun and Khwe San people of Platfontein. Due to the fact that the Footprints of the San route temporarily lack in enough accommodation facilities and the Kimberley Diamond route in cultural activities an agreement was reached between the to separate entities to work together in this regard. In so doing visitors to Kimberley is presented with a diverse and completely representative Kimberley experience.

Footprints of the San