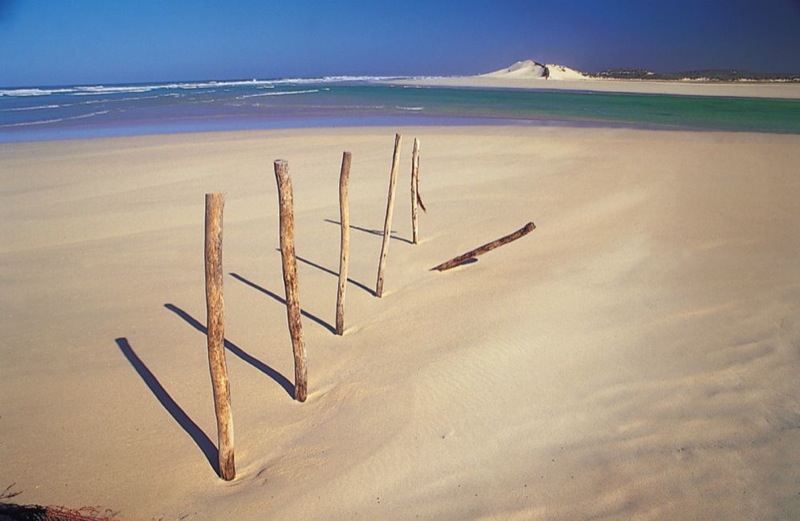 So unspoilt and undisturbed by humans is the De Mond estuary, that the diminutive and highly threatened Damara tern has established a breeding colony on the pebble beds between the dune fields. The Ramsar Convention now also recognises De Mond as a wetland of international importance and worthy of continued protection, specifically because of the terns. The reserve lies at the mouth of the Heuningnes River, between the villages of Arniston (Waenhuiskrans) and Struisbaai, where it once formed part of the farms Zoetendals Vallei and Bushy Park – it is therefore the southernmost CapeNature reserve.

Day visitors will find a picnic under the trees alongside the river a pleasant experience, especially if enjoyed after an exploration of the reserve itself and the river, or even a spot of fishing. Overnight accommodation is limited to a very basic three-bedroom house, sleeping six people. It has electricity, an equipped kitchen and mattresses. Guests must bring their own bedding and gas cookers (open fires are not permitted).

Named after the Damara tern (Sterna balaenarum), the 7km Sterna Trail will take walkers on a 2-3 hour circular tour of the reserve.  Another hike to consider is the four hour De Mond to Arniston, a unidirectional trek along the coast, past Waenhuiskrans cave, and nearby fish traps and middens once used by the Khoisan.

Grunter, steenbras, leervis, elf, cob, springer and striped harder all occur in this estuary and along the coast.  A marine angling licence is required for angling in the river and estuary. The practice of catch and release is encouraged, and bait must be brought, as no disturbance of organisms along the river is allowed.