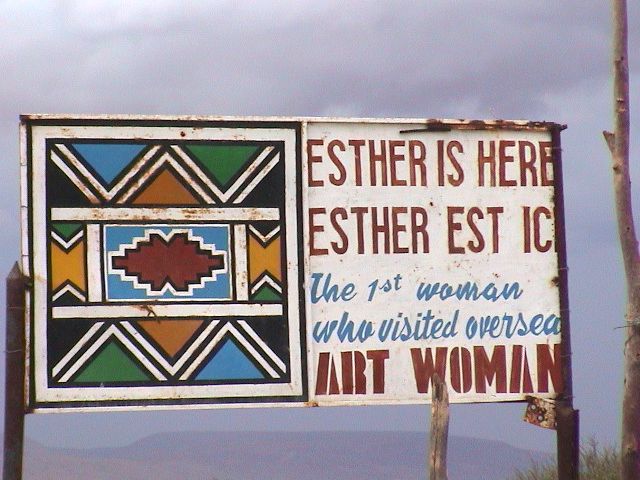 Esther Nikwambi Mahlangu was born in 1935 on a farm near Middelburg in Mpumalanga Province. Esther’s mother, like her grandmother and great grandmother before her, was a simple woman who looked after her family and occupied herself with traditional wall painting and beadwork. During winter most of the Ndebele women kept themselves busy by doing decorations in the surrounding areas, vying to outperform each other with their painting skills. Their designs were austere and uncluttered, handed down by tradition from one generation to the next. Drawings and paintings were done with fingers since brushes were unknown in the early days.

This is how Esther Mahlangu came to be the most famous Ndebele artist. In 1986 researchers from Paris travelled the world to document traditional art, cultures and homesteads. They visited Weltevrede, Kwamhlanga, took photographs of Esther’s eye-catching house with its exterior decorations while she was at work at Botshabelo Ndebele Museum near Middelburg. Astonished at the photographs, she confirmed that the house was indeed hers.

This resulted in an invitation for Esther to travel to France. She had many questions as a local rural woman unfamiliar with western lifestyle. She could barely speak English, let alone French, had never been on a plane and had no idea where France was. Her biggest worry was that she might not find mealie meal with which to cook pap, her traditional meal. However her fears were allayed when it was agreed that her only surviving son, Elias, could accompany her. When the departure date arrived, a 50kg bag of mealie meal was also checked in with her luggage. The large buildings and throngs of people at Johannesburg International Airport all but overwhelmed her. However, Esther bravely took all the new and frightening experiences in her stride.

On arrival in Paris Esther was asked to decorate a house in traditional Ndebele fashion, just like her real home back in South Africa. Amid wide television and press coverage her career as internationally respected artist commenced as thousands of spectators came to watch her work. Before returning home five weeks later she also decorated an inner wall at the local museum of Angoul in France.

Thereafter many overseas travel opportunities to exhibit her work and invitations followed one after another. Now, when she is not at home teaching young girls Ndebele art, she is usually travelling all over the world.

Esther’s other passion in life is to educate and teach not only people from around the world about her art but also the local girls, so that this fragile culture won’t disappear.

In 1975 French auctioneer and racing driver, Herv Poulain, approached BMW with his dream of combining his two passions, motor-sport and art. The idea caught on and Alexander Calder was commissioned to convert Poulain’s BMW 3.0 CSL into a fiery artwork for the  four hour race in Le Mans. This car became the first in a series of BMW Art Cars. The concept proved to be a hugely successful promotional tool, inspiring BMW to continue commissioning famous international artists to decorate special racing cars.

In 1991 Esther Mahlangu was invited to paint a prototype of the new BMW 525i model. Esther’s car, eleventh in the Art Car Collection, was the first to be decorated by a woman artist. Not only her gender, but also her race made this fact all the more exceptional: a black woman artist from a little known South African community had been included in a prestigious international artistic line-up, placing BMW in the spotlight of a cross-cultural, out-of-Africa art promotion.

Esther took a practice run on the door of a different BMW before painting her Art Car. Within a week, she transformed the 5 Series saloon into a masterpiece of Ndebele art, establishing her proud place as the first woman in the line up of international Art Car artists. Unlike the first cars in the BMW Art Cars Collection, Esther Mahlangu’s BMW will never be subjected to driving on the road, but will exist exclusively as a work of art. Johan Walker, in his 1990 publication Art in the Age of Mass Media, wrote:

“…the mass produced item (the BMW car) of an industrial designer has been made into a unique work of art. What was already a status symbol was given the status of Art.”

Today the BMW Art Collection contains fifteen automotive works of art. Significant artists from nine countries from every continent are represented in the collection. BMW’s sponsorship of artistic interaction with the world of technology is aimed at creating intercultural dialogue as an instrument for tolerance and understanding in a culturally diverse world.