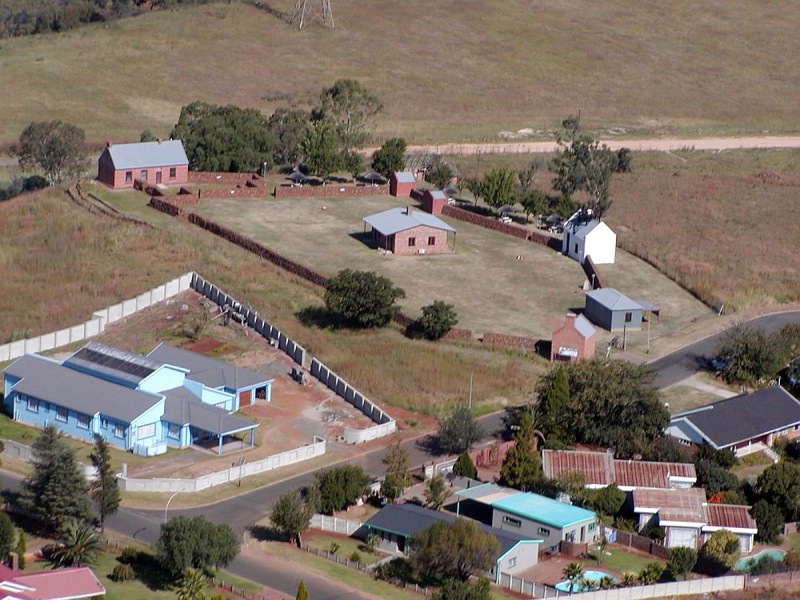 Fort Amiel overlooks Newcastle town and serves as Newcastle’s Cultural History Museum. The fort consist of seven restored buildings that were originally build in 1876 as a British Military Base and used as a transit camp, hospital and commissariat depot. The defence of the fort consisted of a ditch, a rampart and a stone wall.

After the terrain was declared a National Monument in 1979 restoration of the buildings began. The museum was opened in 1990 and contains the historical collections of Newcastle. It serves as an important place of interest for the Battlefield Route, but also serves an educational purpose for the whole community and aims to reflect all the cultures of Newcastle.

Situated in the centre is the Garrison Offices. Displays on the two Anglo-Boer Wars (1880-1881 and 1899-1902) and the history of Sir Rider Haggard (author of amongst other, King Solomon’s Mines) including an original chair that belonged to him, can be seen here. The Guard House houses a display on the history of the building of the fort and information on the various British Regiments who were stationed here. A unique collection of campaign furniture that belonged to the Quarter Master, Captain Perrin, can also be seen. The Cook-house is typical of those found at British Army bases in the 1880’s. It contains a fine collection of period kitchen utensils. In the Canteen various displays on the history of Newcastle and various cultures can be viewed.

Fine 19th century Zulu bead work forms part of this collection. Also on the terrain is a restored Royal Engineers Store, the Magazine and Shell Store.

Visit the old Market Square in Scott Street. Places of interest is the Town Hall, old Library (both declared National Monuments), the old fire station; a water pump and well and see one of the lamp posts dating from the 1880’s; and learn about the Coat of Arms of Newcastle. The tour is concluded with a visit to the Anglo-Zulu War / First World War Memorial.

Historic Newcastle By Car or Bus:

Visit 15 historical sites of Colonial Newcastle, by motorcar or bus. The tour starts in the old cemetery. Learn about the old families of Newcastle and see the Anglo-Boer War graves. From here the tour moves to the historic Kings Hotel and the two houses commandeered up by generals Joubert and Buller during the Anglo-Boer War. See the Dutch Reformed Church and manse and Stone House build for Dr. Ormond. Then visit the Anglican Church, 82 and 84 Paterson Street and 87 Harding Street. Further down Harding Street visit the Methodist church, Masonic Hall and St Andrew’s Presbyterian Church and manse. The Bank of Africa and Hindu Temple concludes the tour.

Visit the old Armoury on the corner of Hardwick and Scott Streets. This historic building was erected during the Anglo-Zulu War of 1879 by the Newcastle Mounted Rifles. It was used as an arsenal where weapons were stored under very strong security. The original steel doors or chubbs, imported from Britain, can still be seen. Admire the firing platform with rifle turrets or loopholes for the protection of the troops who would man the Armoury. Today the building is being occupied by the MOTHS. A Stuart or ‘Honey‘ tank from the Second World War can be viewed in front of the building.

The first convent in Newcastle was founded by Mother Rose Niland in 1896. In 1909 the present property was bought by the Order of St. Dominic. Brother Nivard Streicher designed  the red brick buildings in the New Romanesque style that resembles the great monastic tradition of the Middle Ages. In the grounds is the Pavilion built in 1916 as a skating rink and gymnasium. It was also used for social or sporting events. It has been declared a National Monument. Today the convent is a private school administered by a board of Governors.

There are numerous ghost stories told in and around Newcastle. In particular, Fort Amiel and the surrounding area are known to be haunted.

Fort Amiel and the surrounding area said to be haunted.  Since the erection of this British military outpost in 1876 it has been the last resting place of many soldiers who are buried a short distance from the fort in the cemetery. Two sightings of a soldier have been seen in the Cook House. This red coat soldier once ‘slapped’ an unfortunate gardener through the face and in another incident ‘lifted up’ another worker and “dropped” him while reminding him that he did not give him permission to enter. In the Royal Engineers Store a sighting has also been made.

A resident in one of the houses in the present suburb of Amiel Park, close to the fort, eventually moved away after unbearable noises, amongst others the galloping and whinnying of horses, started every night at 12 o’clock. Many residents still find rusted horse shoes and other remains of the military activity of the past in their gardens.

Fort Amiel is off the Memel/Vrede Road into Eaton Road, left in Amiel Road and then right into Fort Road.