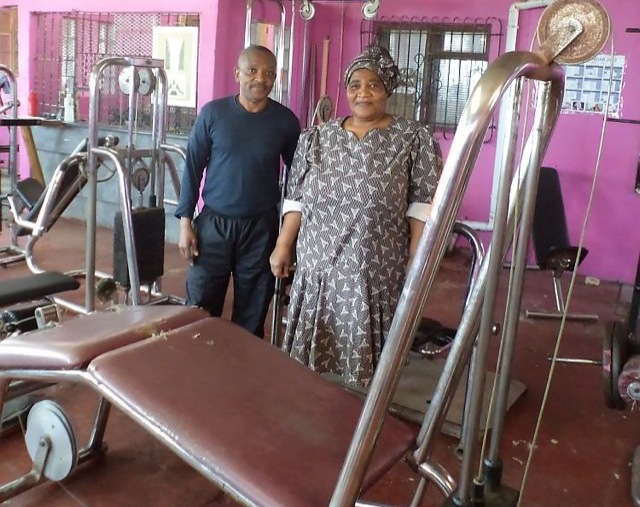 Oupa started the gym in 1986 using a spare bedroom. The gym equipment was consisted of two bars and four weights.  In 1988 he built a small garage and converted it into a gym and managed to lure 13 people from the local community as members. In 1991 an investor from Germany closed down his gym in Nyanga and Oupa bought the equipment at a discounted price. The additional equipment led to the extension of the gym area. Family money and personal loans were used to finance the project. Support from Oupa’s wife, Nobuhle Letsatsi was emance, she now runs the gym as a family business. She is involved with all administrative tasks of the business whilst the husband concentrates on training clients. The business has never advertised due to limited of funds.

In order to gain publicity Oupa embarked on participating in tournaments. Competitors from Mpho’s gym failed the first attempt. At the second attempt a trophy was won. By 2010, 15 competitors from the gym participated in a tournament at Cape Peninsular University of Technology in Bellville. One competitor from Mpho’s gym, Xolile Citwa, walked away with a prize. This particular event led Oupa to network with Tony Freeman an international renowned individual in the fitness fraternity from UK.

The family run fitness centre has been a form of primary groomer of individuals who later went away to other gyms with up to date equipment. This has been an improvement for the individual, but a great loss to the community as most success goes to benefit business in the affluent communities.

Among the gym’s notable events, Oupa recalls inviting a woman from Idutywa who could not walk that came for physic therapy. After coaching her for some time she went away and continued to exercise on her own. Years later the same lady came walking perfectly to express her gratitude. In other related issues, a diabetic man from the community came for coaching and left relieved and much happier. A gentleman who came out of prison testified how he was told by Oupa that there are no short cuts to life and is now being coached at the fitness centre. There are other individuals from the Khayelithsa community pursuing professional careers locally and abroad who passed by Mpho’s gym.

Oupa has entirely relieved all the administrative duties to his wife who now runs the business whilst he concentrates on the technical processes. Due to growing social and health issues in a township life, there is a great need to increase the size of the gym by building a second storey on the existing structure. The gym equipment needs to be replaced and the ablution system needs upgrading. There is great potential to change people’s lives in different aspects. As Oupa is now getting old, the financial muscles to support the centre are waning away. Advertising and sponsorship will be appreciated to keep the centre operating. The gym is being run out of passion and a need to leave behind a legacy of fitness for the soul, body and spirit in the Khayelitahsa community.