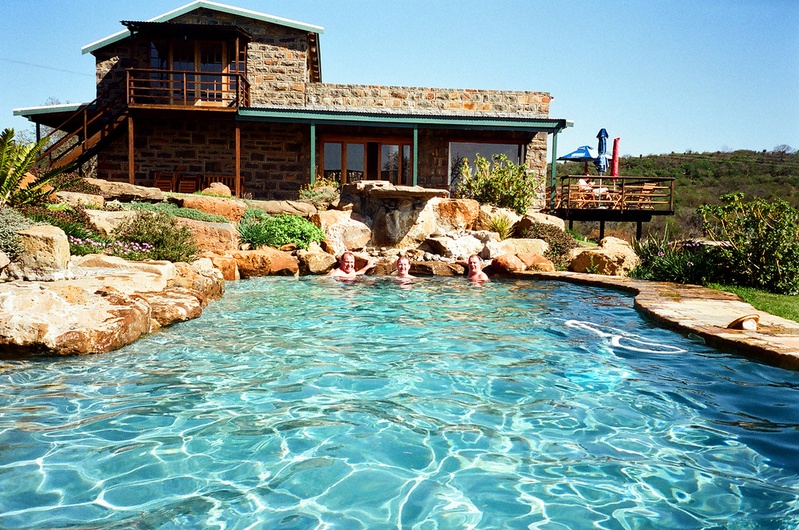 SpionKop Lodge is set against the backdrop of the majestic Drakensberg mountains, on the KwaZulu-Natal battlefields route.  Situated on an expansive 700 hectare game farm, SpionKop Lodge is the perfect base for exploring the berg, bush, birds, and battlefields of the region. The lodge offers visitors an awesome sense of space and beauty, supreme comfort and warm hospitality. The turn of the century farmhouse has been beautifully restored in Natal colonial style. The converted barn now forms the magnificent dining room that boasts spectacular views. Guests can savour fine cuisine and excellent service whilst appreciating the African landscape and battlefield.

Colonial style chalets are located in the park-like grounds, each individually furnished and appointed to offer luxury en-suite accommodation in an out-of-Africa setting. Guests are offered the choice of full board or self-catering facilities. Cool down in the natural rock pool surrounded by water features, enjoy a quiet drink at the pub or spend time in the historic library with its extraordinary collection of war books. There are a multitude of activities on offer.

Guests at SpionKop Battlefield and Safari Lodge will be free to set their own pace…. bird-watching from canoes on the Tugela river… game-viewing from safari vehicles or on horseback in the nature reserve bordering the farm… sunset cruises on the tranquil and beautiful SpionKop Dam…outrides to overnight stops at Vaalkrans Battlesite on the banks of the Tugela River… and the opportunity to relax on one of the most magnificent game farms in the country while the rest of the world rushes by. There is also the majesty of the nearby Drakensberg mountains, which for generations has been a favourite getaway destination for South African holiday makers and international tourists

Game drives in the SpionKop Game Reserve will give you a chance to see rhino, giraffe, buffalo and a variety of antelope. Enjoy a sundowner cruise on the tranquil SpionKop Dam. Bird lovers will marvel at the vast number of birds this area has to offer – 270 species have been sighted. Birding safaris are arranged through the lodge. Hiking, canoeing and fishing are also on offer so your visit can be as action packed or relaxed as you make it. The business fraternity has the opportunity to gather at the lodge’s modern, well appointed conference centre. Whilst happy couples can be guaranteed of an unforgettable Wedding Day by tying the knot at a really special venue.

Relive the memories and walk in the footsteps of three great leaders, Winston Churchill, Mahatma Gandhi and Gen. Louis Botha.  Britain marched into the South African war in the spring of 1899, confident that it “would all be over by Christmas!” The war lasted three years and was to become the most costly Britain had ever fought.

Quote by Winston Churchill: “History will be kind to me for I intend to write it.”  What do visitors to Spionkop have in common with Churchill, Gandhi and Botha?  Being at SpionKop – “Stand on the hill where history was written”.

Spionkop was the scene of one of the most futile and perhaps bloodiest of all battles fought in the 1899-1902 Anglo-Boer War. It is also where Winston Churchill as a 23-year-old war correspondent, stretcher bearer Mahatma Gandhi, and Boer General Louis Botha all fought at the same time before they went on to shape history. And it is where you could relive the memories of that day and walk in the footsteps of three great leaders with Anglo-Boer raconteur Raymond Heron of Spionkop Lodge, should you decide to enjoy the area. The farmstead on which Spionkop Lodge is located was seconded by the Commander-in-Chief of the British forces, Sir Redvers Buller, for his headquarters. His troops camped on the farm for several days prior to the Battle of Spionkop. The British suffered heavy losses in an effort to relieve the beleaguered town of Ladysmith where their forces were besieged by Boer Commandos for 118 days.

Your host, Raymond, will accompany you to the many historic sights. He paints a vivid picture of the personal trauma and military mindset that resulted in the slaughter of so many British and Boer soldiers. Tours to the various battlefields can be made on horseback or in the comfort of an air-conditioned vehicle. It is a story on which the sun never sets.