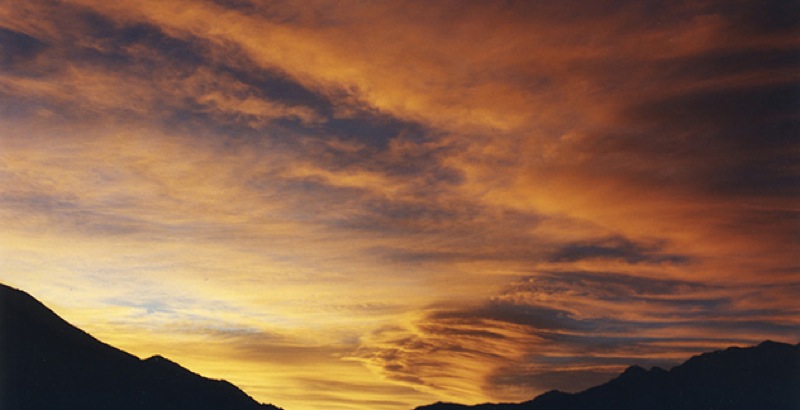 Swartberg Nature Reserve forms the boundary between the Great Karoo plains and the rugged, undulating Klein Karoo. This rugged mountain range stretches from Willowmere in the East for a distance of approximately 250km to beyond Ladismith in the West and includes such well known landmarks as Meiringspoort, Swartberg Pass, Gamkaskloof (The Hell), Seweweekspoort and Towerkop peak. The highest peak in the Western Cape, Seweweekspoort Peak (2324.9m), is one of more than twenty peaks in the range that are higher than 2000m. The reserve’s vegetation is remarkably diverse, featuring renosterveld, mountain fynbos, Karoo-veld, spekboom veld and numerous bulb species. Some species are in bloom almost throughout the year.

In the 1830’s, some people sought and found a life free of strictures in a kind of natural stricture – the long, green valley that came to be called The Hell or Gamkaskloof. They could only get there on foot and with the help of pack donkeys. It was a day’s journey from the Calitzdorp side, down a rickety track known as The Ladder, or along the Gamka River gorge. Then, when they reached the almost 20km long valley, they still had a trudge to their dwellings, staggered intentionally at far cries from one another. Needless to say, they had a difficult time of it, and by the 1990’s were all gone.

The road to get into The Hell is one of the most scenic in the country, steep in parts, and torturous, but so wondrous you wish it would never end. As is the road that serves it – the Swartberg Pass, an old-world classic and arguably one of the most spectacular in the country, if not the world. It was declared a national monument in its centenary in 1988.  Gamkaskloof, or The Hell, was declared a national heritage site in 1997. The valley is of ecological, archaeological and cultural-historical importance and is now managed as part of the Swartberg Nature Reserve.

Over the crest, on the Prince Albert side of the pass, is the Old Toll, an overnight cottage used by hikers beginning and ending their trails. There are a further two overnight huts on the trail, at Bothashoek and Gouekrans. The hiking trail is limited to 18 people, as the Bothashoek hut can only sleep 18 people. Bunk beds and mattresses are provided, as are toilets and cold showers. Braai (barbeque) areas are available at Ou Toll and Gouekrans, but own firewood must be supplied.

Down in the Valley of the Lions, the Gamkaskloof, things are quite different to what one might imagine. The emphasis is on comfort.  Seven original valley cottages have been restored and are run as self-catering houses, with fridges, stoves and hot water. They vary in size, sleeping between four and seven people each. Cutlery, utensils and bedding are provided. There is also a campsite at the top end of the valley, with 10 sites, ablution and braai (barbeque) facilities.  The bush shelter at the bottom end of the valley is a no-frills dormitory with 12 beds, braai (barbeque), toilet and hot shower.  Wood can be bought in the valley, though supplies are limited.

Visitors can hike, cycle and drive in these mountains. The 4×4 route is a privilege few overlanders have had. The 73.2km out-and-back Swartberg 4×4 Route covers an area until recently closed to the public. It cuts southeast, more or less straight across the top of the Swartberg, with views for hundreds of kilometres in almost every direction. The scenery is rugged and driving is at times testing. A maximum of twenty vehicles are allowed on the route and a minimum of two. Gate keys must be arranged when making a reservation.  The route will take you the best part of a day to complete, or one can overnight at the 36km mark with prior booking.

Hiking options here range from easy day hikes – both in the Swartberg and down in Gamkaskloof – to a strenuous five-day trek through the mountains. The 6km Grootkloof Trail, in Gamkaskloof, is an interesting interpretive trail (a point-to-point booklet is provided) that gives an idea of how early inhabitants eked out their livings. A highlight being the ruin of Tant Lenie Marais’ Agter-Osberg cottage, which she apparently built herself and to which she would on occasion repair. She lived, for the most, in one of the better houses in the valley proper, which she also upgraded.

As Paul Leger, author of A Guide to Mountain Bike Trails puts it, no visit to the Karoo is complete until you have taken on the Swartberg Pass and the road to The Hell and back. He does suggest a back-up vehicle, however.

Tips for The Hell: