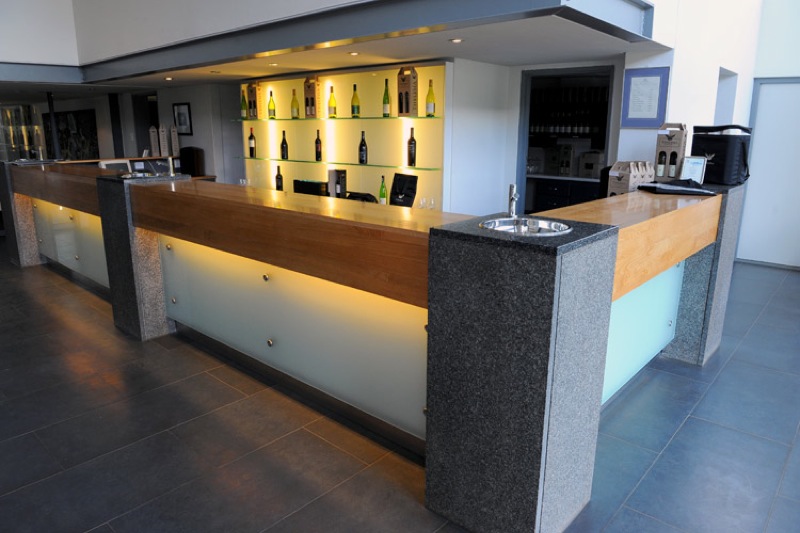 Current wine production on Thelema is approximately 30 000 cases per annum, of which about 25% is exported. Thelema is very much a family business, with Gyles’s mother-in-law Edna looking after sales at the counter, wife Barbara dealing with the restaurant and bottleshop sales and father-in-law David looking after the business end of things.

While Thelema is undoubtedly a successful wine property, there is no hint of complacency – the ambition of the owners is to produce better, more intense and complex wines that will be acknowledged internationally as superb examples of South African wine.

Visitors are welcome at Thelema and can taste wine and make purchases. Items for sale include glasses, corkscrews, cooler bags and wine carriers. Visitors should also not miss the Thelema tapestry – which is a 16th century tapestry that represents the refined life of the Thelemites.

The origins of Thelema:

The tale of Thelema comes from the collection of stories by Rebelais (one of 16th century France’s most colourful writers). In the book of Gargantua, he tells of a great battle between Gargantua and Pichrocole, in which the former ‘utterly defeated’ the latter. After the battle, Gargantua divided the spoils and finally only had to provide for one monk. Gargantua offered him many lofty titles, complete with bountiful lands, but the monk refused them all. The monk explained that he did not wish to rule over other monks – instead he suggested Gargantua could reward him with leave to found an Abbey after his own ‘minde and fancie’. This intrigued Gargantua, who offered him all the land of Thelema by the river Loire. Here, with Gargantua’s blessing, grew a unique religious order.

The Abbey of Thelema was not walled, time was not circumscribed by clocks or sundials, men and women were allowed to live freely with each other, and people were dressed in the finest satin and cloths. Rebelais entered into some details about who would qualify as a devotee of Thelema…

“Therefore it was ordained, that into this religious order should be no woman that were not faire, well featur’d and of sweet disposition; nor men that were not comely, personable and well conditioned.”

In contrast to the three vows of chastity, poverty and obedience taken by conventional religious men and women, the followers of Thelema were allowed to be honourably married, become rich and live at liberty. One law governed the Thelemites, a simple and beautiful one: “Do what thou wilt”. It has been greatly abused and much misunderstood, for the rule is not an open invitation to chaos, but a call for true self-examination.

The history of Thelema:

In 1983, Gyles Webb and his wife’s family bought a run-down fruit farm situated about 6km outside Stellenbosch on the slopes of the Simonsberg. There were no vines on the property at the time of purchase so the slow process of turning the property into a wine farm began, with the removal of the old plum and pear orchards and the clearing of virgin mountainside land. Meticulous attention to detail in the vineyards has paid off, as Thelema was, for three years, adjudged to have the best vineyards in the Stellenbosch region and remains a benchmark for viticulture excellence in South Africa.

Since then, 50ha of vineyards have been planted. In 1987, a winery was built to handle the fruit from the property, and the first wines were produced in 1988. From the early days, the farm has enjoyed considerable success. Gyles Webb won the Diners Club Winemaker of the Year award in 1994 and 1996. For three years in a row, Thelema Chardonnay was voted best white wine at the prestigious South African Airways wine selections, and for two years in a row Thelema red wines were voted the top red wine. The Wine Spectator has twice listed Thelema in the Top 100 Wines of the World.