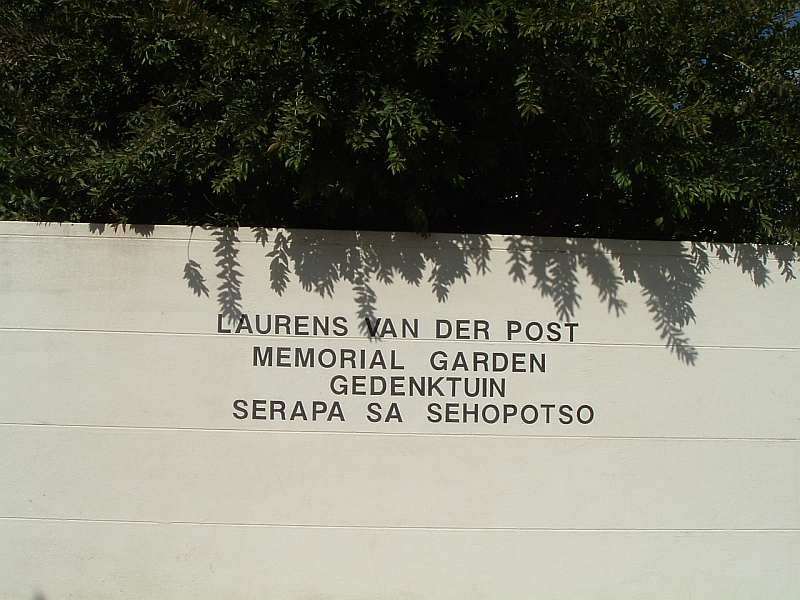 The Van der Post Memorial Centre was founded in 1998 in Philippolis.

The centre consists of:

The Memorial Garden and the Artist’s Retreat were both opened officially by Prince Mangosuthu Buthelezi, a personal friend of Sir Laurens.

Charles, Prince of Whales, considered him a mentor and friend and appointed him godfather of his son. Carl Gustav Jung knew him as a personal friend. The bushmen called him “the white Bushman”. Laurens Jan van der Post was born in Philippolis on 13 December 1906 as the thirteenth of fifteen children.

Both in peacetime and in war he led an extraordinary and eventful life and one of great significance for our time.  He served with distinction in the British army during the Second World War and spent three years in a Japanese prison camp. After the war, he returned to active service as a member of Lord Mountbatten’s staff in Indonesia.

From 1949 he took part in many official expeditions and missions in Africa in search of Bushmen. As a boy, his father had told him many stories of hunting the Bushmen – and this compelled him to “give something back” to the Bushmen people.

Laurens van der Post was appointed Commander of the British Empire (CBE) in 1947 for service in the field and in 1981 he was awarded a knighthood. He spent most of his final years in England and died on 16 December 1996 at the age of ninety.

During his life, Sir Laurens published 25 books. He regarded life as a journey and saw “… man, on his journey from the cradle to the grave”. In designing the memorial garden it was important to capture and symbolise this belief. The garden also had to pay tribute to his philosophy of “meaning transfigures all” in a concrete, tangible manner. The labyrinth is the latest addition to the centre and was made finically possible by Mr Karel Bos Snr of Bosal International.

The Artist’s Retreat is there to serve as a workspace for artists, musicians and researchers. When it is not in used by artists, it is available as a guesthouse.

The van der Post Memorial Centre was founded by Bertie Haasbroek, Alida Stewart and the daughter of Sir Laurens, Lucia van der Post and her husband Neil Crichton-Miller. Neil and Lucia live in London, while Bertie and Alida live in South Africa. The local community is represented by Maffa Lichaba.