At the edge of an ancient, parched river valley, shielded by a dune of red Kalahari sand, the Vogelstrausskluft Lodge is situated ... 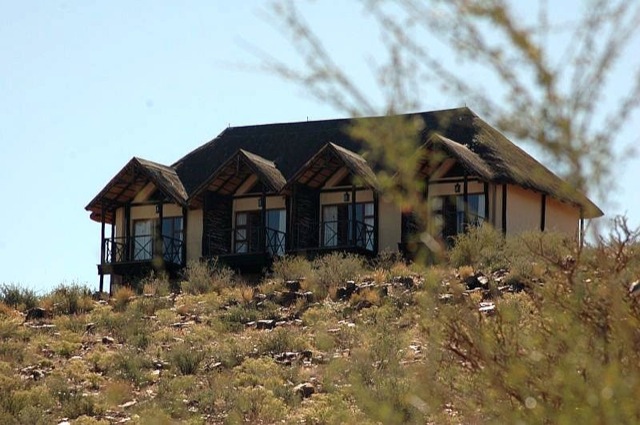 At the edge of an ancient, parched river valley, shielded by a dune of red Kalahari sand, Vogelstrausskluft Lodge is situated in o... 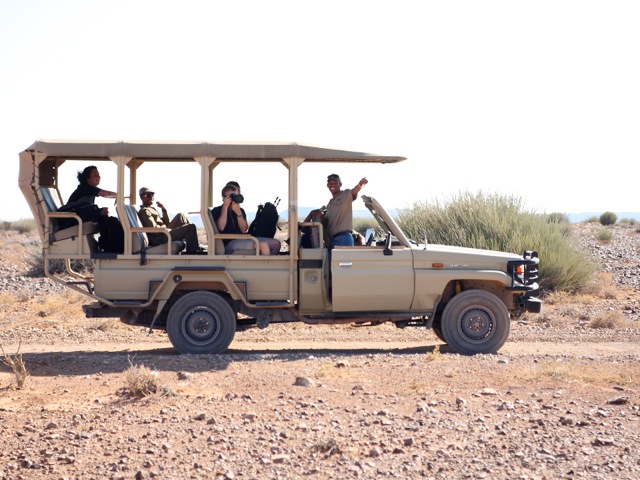 Fish River Lodge in southern Namibia is the only lodge perched directly on the rim of the Fish River Canyon offering guests breath...

Fish River Lodge in southern Namibia is the only lodge perched directly on the rim of the Fish River Canyon offering guests breath...

The Witputs Route is a scenic drive through farmlands between Rosh Pinah and the B4 to Keetmanshoop. Take the C13 from Rosh Pinah to Aus and turn right 47km from town onto the D463. The route takes you past the northwestern boundary of the Fish River Canyon National Park, before heading to Feldschuhhorn, where it eventually meets the B4 to Lüderitz and Keetmanshoop.

Just after the turn off from the main road you will see the original Witputs farmhouse ruins on the left. The house belonged to Reinier Coetzee who was apparently the last person to ever see Adolf Lüderitz alive. On the right hand side is the police garrison that patrols the area from here to the Sendelingsdrift Gate.  At the hill behind this building you can still see old South African World War I trenches and ruins. General Manie Maritz stayed here for three months to train horses for the Schutztruppe. Maritz was charged with treason in the 1920’s for having joined the German forces in South-West Africa in 1914.

From here you pass through the landscape of the Huns Mountains. The area is known for the Apollo XI caves. The caves contain painted rock fragments from the middle stone age (27000-25500). The painted slabs were discovered by Wolfgang Wendt in 1969. The seven slabs of rock with traces of animal figures that were found in the Apollo 11 Cave have been dated with unusual precision for ancient rock art. Originally brought to the site from elsewhere, the stones were painted in charcoal, ochre, and white. Until recently, the Apollo 11 stones were the oldest known artwork of any kind from the African continent. They are located on the farm ‘Uitsig‘ but are not open for public viewing yet, although it is being considered.

The Route takes you further to the Konkiep River where you can see the ruins of an old farmhouse with an old well (see map for location). From here you will pass along the Canyon Nature Park where you can take 4×4 drives into the canyon as well as hiking trips. Further down the road, you come to Rooipunt Farm, where you find the ‘singing stones’, so named because they can be brought to life by knocking on them in different places to create a sound resembling that of a xylophone.

The Fish River is, at 650km, the longest river in Namibia. Its source lies in the eastern Naukluft Mountains and it flows southwest of Ai-Ais into the Oranje.

The Fish River Canyon, on the lower reaches of the Fish River, is one of the most impressive natural beauties in southern Namibia. It developed predominantly during the pluvial times – a rainy epoch – many millions of years ago. With a depth of up to 550m, the Fish River Canyon is the second largest canyon in the world, after the Grand Canyon of America. This enormous gorge meanders for about 160km through the fissured Koubis massif, down to Ai-Ais. The canyon runs for 161km, from Seeheim to Ai-Ais.

The Fish River Canyon was created about 500-million years ago by water erosion and the collapse of the valley bottom due to movements in the Earth’s crust.

Because the Fish River is being dammed in Hardap near Mariental, it only has a small amount of running water, and in the dry winter season, the riverbed is often compley dry. After the summer rainfall, the river is often transformed into a raging torrent.

The canyon forms part of a nature conservation park. The gate is found at the Hobas rest camp, from where a 10km-drive takes you to the canyon, which offers a stunning view of Hell’s Bend.

The Fish River Canyon has become a popular hiking destination, but hikes require good physical health and should only be undertaken during the cooler winter months (between May and September). A permit from Namibia Wildlife Resorts in Windhoek must be obtained. The hike is 86km and takes about five days.

Just after the turn off from the main road look out for the original Witputs farmhouse ruins on your left. The owner, Reinier Coetzee, was apparently the last person to ever see Adolf Lüderitz alive. On the right is the police garrison that patrols the area up to the Sendelingsdrift gate. On the hill behind the building there are remnants of old South African World War One trenches and ruins. General Manie Maritz stayed at Witputs for three months to train horses for the Schutztruppe. Maritz was charged with treason in the 1920’s for having joined the German forces in South-West Africa in 1914.

The Maritz Rebellion (Boer Revolt) (Five Shilling Rebellion), took place in South Africa in 1914 at the start of World War I, in which men who supported the recreation of the old Boer republics rose up against the government of the Union of South Africa. Many government members were former Boers who had fought with the Maritz rebels against the British in the Second Boer War, which had ended 11 years earlier. The rebellion failed, and the ringleaders received heavy fines and terms of imprisonment.

The outbreak of hostilities in Europe in August 1914 had long been anticipated, and the government of the Union of South Africa was well aware of the significance of the common border South Africa shared with the German colony of South-West Africa. Prime Minister Louis Botha informed London that South Africa could defend itself and that the Imperial Garrison could depart for France. When the British government asked Botha whether his forces would invade German South-West Africa, the reply was that they could and would.

South African troops were mobilised along the border between the two countries under the command of General Henry Lukin and Lt Col Manie Maritz early in September 1914. Shortly afterwards, another force occupied the German port of Lüderitz.

When the South African government offered to invade the German colonies, the commander-in-chief of the Union Defence Force, general Christiaan Beyers resigned, writing, “It is sad that the war is being waged against the ‘barbarism’ of the Germans. We have forgiven but not forgotten all the barbarities committed in our own country during the South African War,” referring to the atrocities committed by the British during the Boer War. A nominated senator, general Koos De La Rey, who had refused to support the government in parliament over this issue, visited Beyers. On September 15 they set off together to visit major JCG Kemp in Potchefstroom, who had a large armoury and a force of 2 000 newly trained men, many of whom were sympathetic to the rebels’ ideas.

Although it is not known what the purpose of their visit was, the South African government believed it to be an attempt to instigate a rebellion, as stated in the Government Blue Book which covers the historic event. According to general Beyers, it was to discuss plans for the simultaneous resignation of leading army officers in protest against the government’s actions, similar to what had happened in Britain two years earlier in the Curragh incident over the Irish Home Rule Bill.  On the way to the meeting De La Rey was accidentally shot by a policeman at a road block set up to look for the Foster gang. At his funeral, however, many Nationalist Afrikaners believed and perpetuated the rumour that it was a government assassination, which added fuel to the fire, which was even further inflamed by Siener van Rensburg and his controversial prophecies.

General Maritz, who was head of a commando of Union forces on the border of German South-West Africa, allied himself with the Germans and issued a proclamation on behalf of a provisional government which stated that “the former South African Republic and Orange Free State as well as the Cape Province and Natal are proclaimed free from British control and independent, and every White inhabitant of the mentioned areas, of whatever nationality, are hereby called upon to take their weapons in their hands and realize the long-cherished ideal of a Free and Independent South Africa.” It was announced that Generals Beyers, De Wet, Maritz, Kemp and Bezuidenhout were to be the first leaders of this provisional government. Maritz’s forces occupied Keimoes in the Upington area. The Lydenburg commando under General De Wet took possession of the town of Heilbron, held up a train and captured government stores and ammunition. Some of the prominent citizens of the area joined him, and by the end of the week he had a force of 3000 men. Beyers also gathered a force in the Magaliesberg; in all, about 12,000 rebels rallied to the cause.

The government declared martial law on 14 October 1914, and forces loyal to it under the command of General Louis Botha and Jan Smuts proceeded to suppress the rebellion. General Maritz was defeated on 24 October and took refuge with the Germans. The Beyers commando was attacked and dispersed at Commissioners Drift on 28 October, after which Beyers joined forces with Kemp, but drowned in the Vaal River on 8 December. General De Wet was captured in Bechuanaland, and General Kemp, having taken his commando across the Kalahari desert, losing 300 out of 800 men and most of their horses on the 1100 kilometre month-long trek, joined Maritz in German South-West Africa, but returned after about a week and surrendered on 4 February 1915.

After the Maritz rebellion was suppressed, the South African army continued their operations into German South West African and conquered it by July of 1915. 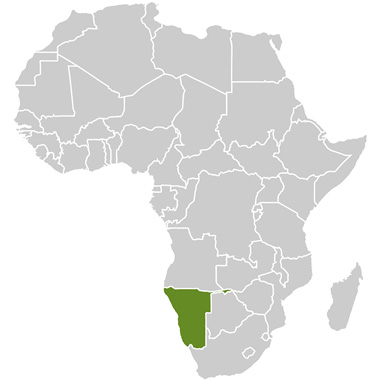 Namibia
The route takes you past the north-western boundary of the Fish River Canyon National Park, before heading to Feldschuhhorn, where it eventually meets the B4 to Lüderitz and Keetmanshoop.