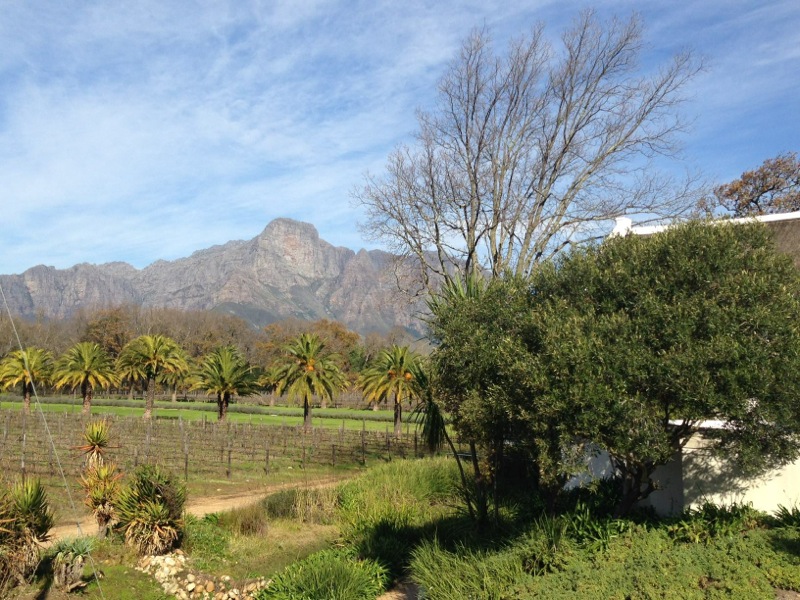 Peter Anderson, from the German port of Tonning, arrived in Cape Town courtesy of the Dutch East India Company and was awarded land in the Groot Drakenstein area in October 1687. He was an able farmer and because he proved he could work the land, it was granted to him in 1690. Three hundred years later, the farm finds itself owned again by Germans, Wilfred and Elke Dauphin.

The homestead area is being developed as a conference centre, a boutique hotel, restaurant, and olive and wine tasting/sale facilities. Lotte, the resident Percheron mare, can draw visitors through the farm in a carriage.

The vineyards producing grapes for winemaking on Allée Bleue Estate are managed using environmentally friendly practices. 25ha of Pinotage, Shiraz, Semillon, Chardonnay and Cabernet Sauvignon vines are planted on the farm’s cooler stony, decomposed Table Mountain granite soils. The soil is covered by natural groundcover in the riverine microclimate, which allows for slower ripening – along with crop reduction through controlled stressing, this broadens the flavour spectrum of the estate’s wines.

Named for the imposing cathedral-like avenue of blue eucalyptus at the entrance to the farm, the Allée Bleue Pinotage 2001 won a double gold medal at the 2001 Veritas Wine Awards. When the vines on the farm reach maturity, Allée Bleue Estate will build its own cellar. Production will remain small with the emphasis on premium wines encapsulating the essence of soils, the microclimate and the labours of the people involved in the growing of the grapes and the making of the wines – as well as the architectural, cultural and agricultural history of Allée Bleue Estate.

The name of the Estate:

At one stage the estate was named ‘Meerrust’, but after an unfortunate name dispute with the Stellenbosch wine estate ‘Meerlust’, the owners decided to capitalise on the spectacular success of the Allée Bleue brand and according elected to avoid protracted legal proceedings by naming the farm the Allée Bleue Estate.

Literally translated from French, the estate names means ‘avenue of blue’ and refers to the hydrangea and eucalyptus-lined entrance road. The name also represents the Dauphins’ personal life philosophy – that of an appreciation for the grandeur found naturally on our Blue Planet.