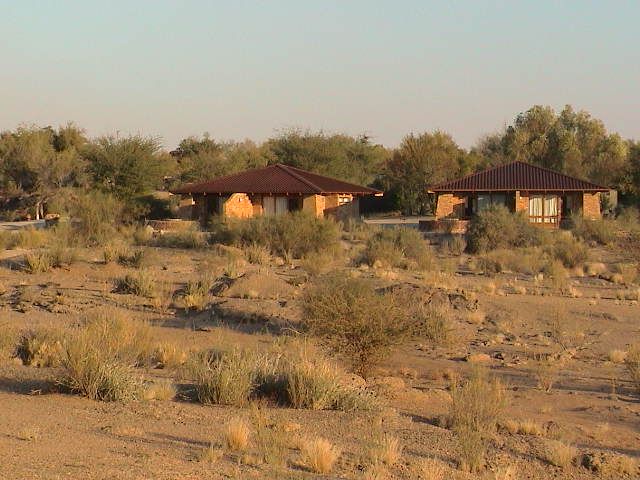 The Augrabies Falls National Park is the site of the Augrabies Falls or ‘the place of great noise’ (which is the meaning of the Khoi word ‘Akoerebis’). Here, the Orange River thunders spectacularly down a 60m-drop into a gorge hewn through huge rocks. The Khoi people had great respect for the falls and usually avoided the area as they believed it to be home of the great white water monster. Picturesque names such as Moon Rock, Ararat and Echo Corner are descriptive of this rocky region.

Covering 88 000 ha on both sides of the Orange River, the Park lies 120km west of Upington (which has a domestic airport) and 40km northwest of the town of Kakamas. The roads to the park are tarred; 4×4’s are only needed if visitors wish to do the 4×4 trails. The suspension bridge over the gorge was washed away in the floods of 1988 and, until a new bridge is built, the only way to the north side of the Park and its 4×4 trails is to drive back to Kakamas and along the Riemvasmaak road to the northern park gate.

The Park is home to 46 mammal species, 186 bird species, 21 snake species, 12 fresh-water fish species and 24 species of lizards, skinks, agamas and leguans. Lucky visitors may even spot leopard on a night drive. While it provides sanctuary to many diverse species from the smallest succulents, birds and reptiles to antelope like springbok and gemsbok, there are two organisms that characterise this harsh landscape where one must adapt to survive: the Klipspringer (small antelope whose name means rock jumper) and Kokerbooms (the Quiver Trees).

The Quiver Tree (Aloe dichotoma):
This tree, with its succulent leaves and cream-coloured stem, is typical of the region.  Traditionally, the stems were shaped into quivers for hunting arrows, used as building materials and even as storage vessels to keep meats cold. The words ‘Die weer is mooi, 11 Des 1933. Daar is hoop’ are inscribed on a quiver tree in the park. They mean ‘The weather is fine, 11 December 1933. There is hope’ and were carved by a sheepherder during one of the worst droughts in history. It started raining two days later.

Cancer Bush  (Sutherlandia frutescens):
In bloom or bearing fruit, this bush is unmistakable thanks to its bright red flowers.  Its fruit, bark and leaves provide food for cows or sheep and man uses the leaves as a remedy for stomach ailments and colds.  The bush is also said to successfully treat cancer, liver diseases, rheumatism and backache.

Black Flies:
Visitors to the park will experience the menace of millions of little flying insects.  These are black flies or ‘muggies’ in Afrikaans. Black flies breed in water and prefer rocky, fast-flowing sections of the Orange River.  Wearing a hat and insect repellent will reduce the irritation of black flies in their season (Sep – Apr).

Augrabies Flat Lizard (Platysaurus broadleyi):
Spectacular colours and often-bizarre behaviour make this lizard a marvel to watch.  They are readily visible on the rocks around the viewing areas in the park and can often be approached quite close as they are habituated to people.  They are most active in the morning hours and then escape to the shade for the heat of the day.  The multicoloured males and drab females almost appear to be different species, but both are quite ‘flat’ – allowing them to squeeze into tight crevices. Females equate a male’s brightness with quality, while their own drab colouring assists them to avoid predation.  The lizards’ chief predators are the rock kestrel and the sand snake.  During breeding season from Aug – Dec, the territorial males can fight for females and engage in various forms of display to intimidate their opponent.

African Fish Eagle:
The ‘call of Africa’ is often used to describe this eagle’s evocative and diagnostic call.  The African Fish Eagle is relatively common along the Orange River, although there is some evidence that its numbers are declining due to the destruction of riparian vegetation and thedeterioration of the water quality (which affects the bird’s ability to see fish to catch).

Rock Hyrax / Dassie:
This little mammal (who, peculiarly, is the closest living relation to the elephant) is common in the park.  They scrabble agilely over rocks and can even climb trees to reach foliage.

Klipspringer:
This little antelope (whose name means ‘rock jumper’) is well adapted to arid, rocky areas as they obtain their fluid by browsing on leaves, shoots, fruit and flowers.  The klipspringer has a variety of predators in the park including leopard, caracal, black eagles and even baboons.