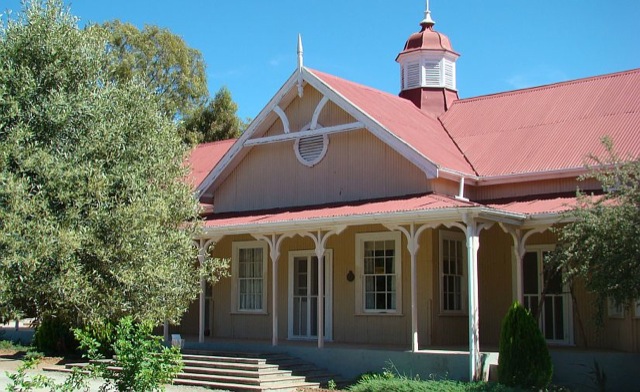 Grootfontein’s history goes back to 1903 when the British department of War purchased certain portions of the farms Grootfontein, Leeufontein, Bultfontein and De Poort for the purpose of establishing a military camp and training centre for British troops. When the Union of South Africa was established in 1910, the farm Grootfontein together with some military buildings and other equipment was purchased from the British Government by the last Minister of Agriculture of the Cape Colony, Mr F.S Malan. On 7 February 1911 it was converted into an agricultural school and experimental station. Discipline was strict, and permission was needed to leave the School. The paraffin lights had to be put out at 21:00 in the evening and the day started at 06:00 in the morning. The students worked on the farm in teams for a week and then spent a week in the classroom.

A special dairy course was introduced in 1913 with 10 students, the maximum that could be taken. The first three-week short course was held in June 1913 and was attended by 30 persons. This was a course in Home Economics (Domestic Science).

The well-known sheep-and-wool course was introduced in 1919. This course was extremely popular from the beginning and the School could hardly keep up with the demand. Grootfontein also took the lead in starting the first Wool Growers’ Associations – those of Middelburg and Graaff-Reinet in 1922. There were many ‘firsts‘ in the development of the Grootfontein Agricultural School in the years to come. In the course of time the number of students grew, the courses and syllabi were progressively extended and adjusted to the requirements of the time. The educational facilities and number of staff accordingly increased so that by 1939, Grootfontein could be given College status and became known as the Grootfontein College of Agriculture.

Because of the Depression, a two-year course in agriculture was introduced in 1934. It was subsidized by the Government and was followed by the introduction of an eight month sheep-and-wool course in 1936.

During the first week of October in 2001 the College was evaluated by the HEQC (Higher Education Quality Committee). Both the Higher Certificate in Agriculture, the Diploma in Agriculture and the Institute as a whole were accredited by the HEQC. This means that students who attain their certificates and diplomas, may further their qualifications (e.g. B.Tech), including degrees at certain technikons.

Except for Grootfontein’s agricultural college image, it houses a rich and diverse history. Several of the original buildings, a pump house and memorial graves from the British War Camp era can be seen. It also has its own museum that exhibits an impressive array of old farm implements and tells the tale of the executed Cape Colony rebels J Lötter and PJ Wolfaardt and his men, who were captured during the Anglo-Boer War. The chair monument, to be seen just outside Middelburg on the Richmond road, was erected after the British occupation to commemorate their bravery.