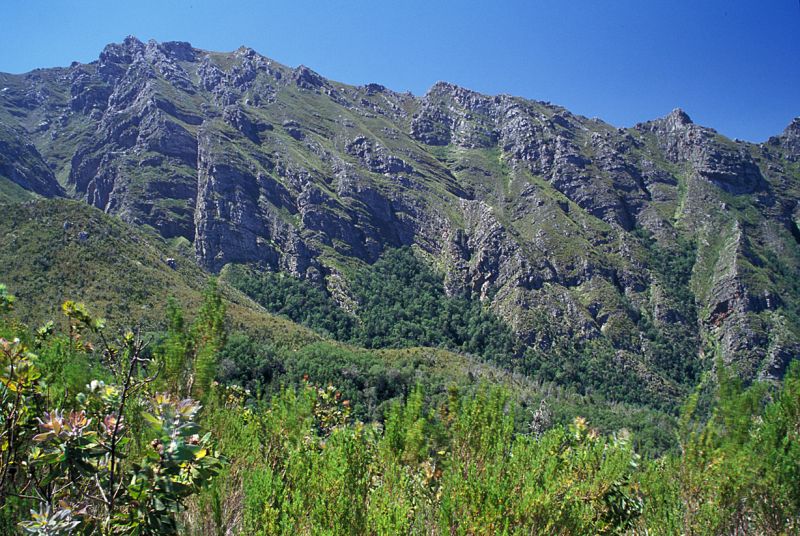 Grootvadersbosch (near Heidelberg) is one of the province’s lesser-known reserves, which, for those who know it and keep returning to it, is how it should be. This forested area, at 250ha the most remarkable in the southern Cape, was once far more wooded than it now is. The natural indigenous forest was harvested severely and a forest station and pine plantation was established on the original farm. Then, in 1986, CapeNature assumed control of the area, and two years later, began clearing the pines, so that today, where there is no indigenous forest, there is at least fynbos.  Bushbuck and other small game, as well as numerous birds make the fynbos and indigenous forest at Grootvadersbos their home.

Out on the edges of either end of the forest are two wooden, self-catering chalets – one sleeping six and the other seven. A small campsite with its own ablution block is situated not too far from the office complex and the interpretation centre. Each of the ten sites available look out over a section of the forest. Here there is also a large, thatched communal lapa/braai (barbeque) area, with a fridge that hard-pressed campers can use.

Besides making use of the hides built into the forest canopy, visitors are welcome to hike, horse ride and mountain bike around the reserve and neighbouring properties. Thanks in large part to a conservancy that borders on the reserve, the Grootvadersbosch Conservancy Cycle Trail (58km) is one of the best – graded moderate to difficult. Two day-hikes, the bushbuck and the grysbok, are between 2-15km long. The former is confined to the forest, the latter explores the forest fringes and fynbos, but combinations are possible. Riders can simply bring their horse, tack and feed, as paddocks are available.

On the other side of Grootvadersbosch, where the forest opens to heather, lies the 14 000ha Boosmansbos Wilderness Area (proclaimed in 1978). Here there are 64km of unmarked paths, and although at least three are recognised routes, the idea is to choose your own. The aim of a wilderness experience is to find no sign of humans, not even the lights of a farm and to be totally self-sufficient as not even fires are permitted.

Common throughout southern Africa and found in the most unlikely thickets, these relatively large animals, with their white clerical collars, have a remarkable ability to survive in close proximity to people, often without people knowing it.   As a species, they were first noted and scientifically described in 1780 by the Swedish botanist Anders Sparrman from a specimen collected in the forests of Grootvadersbosch.

They are said to still be abundant in these forests. In fact, being more or less nocturnal, they are seldom seen, except at dawn and at dusk, when they leave their deep-cover lie-ups to feed. Their natural enemies are leopard. They can clear fences almost at will and will utter a loud cough and crash away into the undergrowth with prodigious leaps when alarmed.