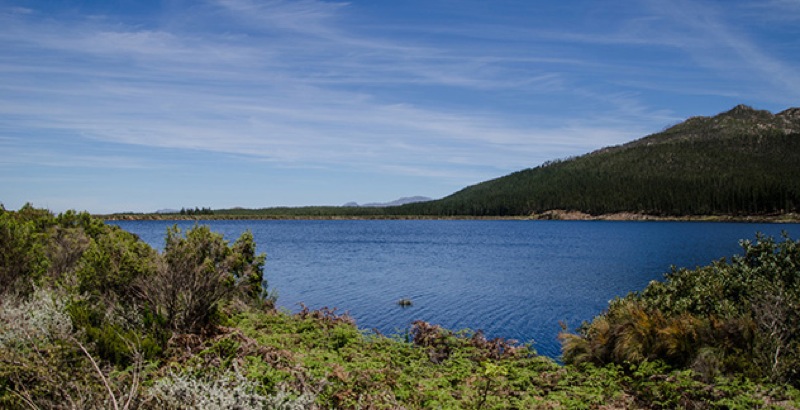 The Dutch colonists called the range of mountains they could see in the east the ‘Mountains of Africa’, as if, once conquered, all of Africa would simply prostrate before them. When it was found that Khoisan people were already living there, they changed the name to Hottentots Holland, as in Holland of the Hottentots. It was a two-day wagon trip just to get from the settlement on the foreshore to the mountains. Then it was an arduous climb up and down the mountains (evidence of the struggles remain today in the form of wagon tracks gouged into the rocks).

Today, the Hottentots Holland Mountains are easily accessible and the nature reserve of the same name is a wonderful starting point for expeditions. The reserve office at Nuweberg (near the town of Grabouw on the R321) serves as base camp to hikers and kloofers, and to visitors generally. There is a car park, toilets and changing facilities, and a small interpretation centre that will help to orientate the first-time visitor. A short trail has been laid out nearby for the visually impaired. It is 6km long and takes about two hours.

Further afield, four huts have been provided for overnight hikers – one built of stone way up on Landdroskop and one of a prefabricated nature low down at Boesmanskloof. They have bunks, mattresses and water, but are extremely basic – the idea being that one should come away with a strong feeling of having been a shepherd. Be prepared to share these sites with other would-be shepherds, especially at weekends or during holidays.

There are four overnight routes and three day hikes to choose from in Hottentots Holland, as well as a 4×4 route and the two famous kloofing trails. It is important to remember that conditions in these mountains can swing at any time and should be regarded as treacherous year round.

This is not where you drive your car to a vantage point, get out and, from a bench, admire the views, with one of mum’s sarmies in your left hand and your right raised to the bright hues. This is where, with a high, quivering scream, you suddenly up and launch yourself down rock-slide after towering rock-slide into successive pools of deep, dark, icy water, crowded in all around by rocks.  When you cannot slide, you will leap, sometimes as much as 14m, into free-fall and another pool below… and you will do this with only a wetsuit for protection. Some say it is an extreme sport, but on the Riviersonderend (directly translated to mean ‘the river without end’) it is an activity more popular than hiking.

There are two trails to choose from at Hottentots Holland – Riviersonderend Gorge (24km; seven hours), and Suicide Gorge (17km; five hours). Points worth remembering are that you will have to walk 5km from Nuweberg to the start of Suicide Gorge and 3km to the start of Riviersonderend Gorge, as well as another 3km back to Nuweberg from the finish of both trails. Try to start before 09:00, as you will be on the river all day before it flings you out.

Both kloofing routes are closed in winter due to flooding and are only open from October to the end of April. The routes are restricted to sixty people a day and permits are required. Novices must be guided by an experienced kloofer.