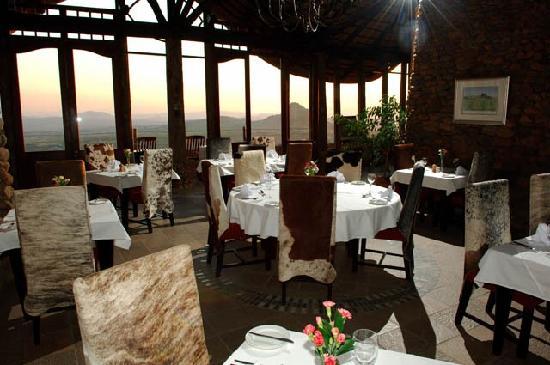 Isandlwana Lodge is an upmarket facility built on the Nyoni Rock below, where the Zulu commander stood during the Battle of Isandlwana on 22 January, 1879.

It is built of native stone with a thatched roof and offers twelve bedrooms, all en-suite, with private balconies. The bedrooms and the main level of the lodge provide unsurpassed views of Isandlwana Mountain, the charming cultural village below and the mountain ranges in the distance.

Isandlwana Lodge is within easy reach of some of South Africa’s major game reserves and it is an easy driving distance from Rorke’s Drift and Anglo Boer sites as well. Rob Gerrard, resident historian at Isandlwana Lodge, takes guests on tours of the battlefields, where he makes history come alive. Isandlwana and Rorke’s Drift are flagship tours.

The group was founded in 1989, the members were all still at school.  As a result they dispersed for different reasons, some went to Johannesburg for employment, others carried on with their studies. In 1996 the Real Messengers was regrouped by Dalton Ngobese and, in 2001, they started performing at Isandlwana Lodge to entertain guests. All the members are from the Isandlwana area. Dalton composes songs from inspirations of his religious beliefs, culture within society, history, HIV/AIDS ….. issues that we face daily inspire him to write about real life drama.

The men have powerful Zulu voices and they ‘proclaim good sound messages of proper living with AIDS’. Through singing and dancing they bring a message of hope, love, faithfulness and encouragement.

Generally, a Zulu member of the Lodge staff takes the tour. During the tour you will visit one of the local schools, see the students at work in their classrooms or performing song and dance routines that have been handed down to them by their parents and grandparents. Each song or dance relates events of history: A hunt or some event that was or is a part of the Zulu way of life.

You will visit a family ikhaya (home) where you will be greeted by members of the family and shown around their individual izindlu (houses). The individual house is called indlu.

During your visit you may be given the opportunity to watch utshwala (beer) being made from amabele (Sorghum) or have the opportunity of tasting it. Watch umbila (maize) ukudla (food) being cooked known to today as impuphu (mielie-meal). There are rituals that should be observed when tasting the beer or food.

Then, you will proceed on to a local sangoma (diviner) who is trained in the art of, amongst other things, how to determine ailments. He or she will then send one onto an inyanga (witch doctor) who diagnoses and produces the medicine or cure. The sangoma can also foresee or predict events.

The revenue generated from these Walks is given in part to village establishments who host Isandlwana’s visitors and the Isandlwana Community Tribal Trust receives R50.00 of the fee each time guests take this tour.

The cultural tours to Qhudeni are generally taken by a white guide, accompanied by a Zulu and takes a full day. The tour departs from the lodge at 10:00. and returns around 16:00. This tour goes into one of the most remote and scenic parts of Zululand.

A region of large mountains, huge ravines, rivers and natural forests. Qhudeni Mountain stands 6000 feet above sea level. Only recently have dirt roads been blazed into this region to allow taxis and other off-road automobiles access. One can encounter Zulu women and children who have had little or no contact with white people here.

One always has to decide what to do and where to go as the tour progresses due to the condition of the dirt roads. For those keen on photography, this tour is an opportunity of a lifetime for capturing some spectacular scenery on film.  The cultural events offered at Isandlwana village may be seen at Qhudeni, but in more natural environments due to the remoteness of the area.

The Maria Ratchitz tour takes the better part of a day. The church is an old, Catholic missionary church, which has been restored. The walls and ceilings have been painted by German artists and are adorned with magnificent frescoes depicting various stations of the Christian Church. Maria Ratchitz, a Bavarian born lady, donated thousands of Deutchmarks for the renovation of this church, a spectacular creation set in the middle of the African veld.

Enroute visit a farm near Elandslaagte where Zulu ladies embroider magnificent wall hangings and tablemats. Return to the lodge via Dundee and have lunch at a quaint restaurant at the Talana Museum.

Tour of eMakhosini, The Valley Of The Kings:

(Including a picnic lunch)

The eMakhosini Valley is not only a place rich in history and of great natural beauty, but it is an area of great ecological diversity, ranging from highveld grassland to valley Bushveld. These habitats support a variety of wildlife and mountain reedbuck, steenbuck, impala and the bald ibis have made their homes in the valley.

The conservation and sensitive development of the eMakhosini presents a rare window of opportunity to preserve a culture and history that has left an indelible mark on the world stage. The conservation of ancestral burial places, battlefields and other sites of archaeological, historical and cultural significance are attracting people from around the world.

The Opathe Game Reserve is part of the eMakhosini Valley project and visitors may see black and white rhino, reedbuck, giraffe, kudu, bushbuck, impala, warthog and other game. At present there are no lion or elephant in the reserve, but, hopefully, will be in the future.

Shaka was brought up in this valley – amaKhosi Zulu (Nkosinkulu), Phunga, Mageba, Ndaba, Jama, Shaka’s grandfather and his father, Senzangakhona, lie buried there. Piet Retief, the Trek leader, and his followers are buried at kwaMatiwane, the Hill of Execution in the eMakhosini Valley.