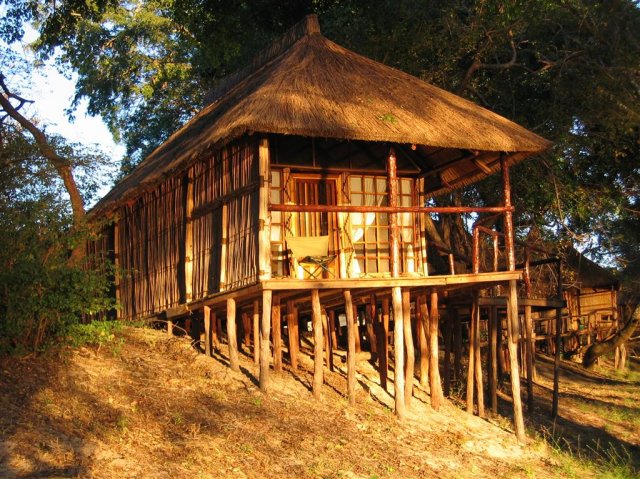 Situated on the banks of the mighty Zambezi within Barotseland, the Lozi people’s mystical wetland region that the famous explorer David Livingstone explored so many years ago, Kabula Lodge has been specifically designed to provide an affordable and comfortable holiday destination for the family who loves the outdoors.

This sparsely populated and relatively unspoilt and untouched region within Southern Africa is regarded by many as the ideal holiday destination and if you are a keen fisherman or birder, then you have found your paradise.

The accommodation at Kabula Lodge consists of seven self-catering chalets, one 4-bed ‘fisherman’s’ chalet, one 3-bed chalet and five 2-bed chalets, and 10 magnificent campsites. The chalets, all with their own deck overlooking the river, come with en-suite bathroom with shower. All chalets are provided with linen and towels and are fully serviced. The kitchens which are equipped with gas refrigerators, gas cookers, tables, cutlery, crockery and basic cooking utensils are available for use by the residents of the chalets.

The fully grassed campsites, situated beneath huge indigenous trees, are without question the best on the river. These are serviced by clean and well designed ablutions that consist of rondavels, each containing a separate toilet and shower. In addition to each campsite having its own washing up facility there is a communal washing up area with hot and cold water. Water is heated twice daily by wood fired boilers. Some of the campsites have their own thatched lapa which contain tables and benches and are ideal for use as a kitchen/eating area. These spacious and well set out campsites, which have a view of the river, are truly magnificent and we are confident in our claim that one will have to go a long way to find better.

The Zambezi River is subdivided into three reaches, the Upper, the Middle and the Lower.Kabula is situated on the Upper Zambezi which is regarded as the best part of the river for Tiger fishing. The Tiger breed in the thousands of pools of the Liuwa floodplains and are flushed out each year by the floods. The best time for fishing at Kabula is from June to May when the water is warm and the level of the river is low before the start of the rainy season. Large tiger fish are plentiful, as are various species of bream, particularly the predatory yellow-belly and thin face breams which make for great fishing and wonderful eating. Large barbel, which will also give you a fight to remember, are also plentiful.

Fishing boats, which are provided with experienced boatmen who know the river, and the best fishing spots, are available for hire. Fishing rods and tackle are provided with the boats if required. Please note that unfortunately private boats are not permitted. Please also note that fly-fishing for bream and tiger fish is becoming increasingly popular. To catch a large tiger fish on a fly rod is an unforgettable experience.

Whilst renowned for its tiger fishing and birding, Kabula offers so much more, including walks in the surrounding un-spoilt indigenous forests, walks on the famous KabulaIsland, canoeing and rafting on the river and easy access to the totally un-spoilt SiomaNgweziNational Park.