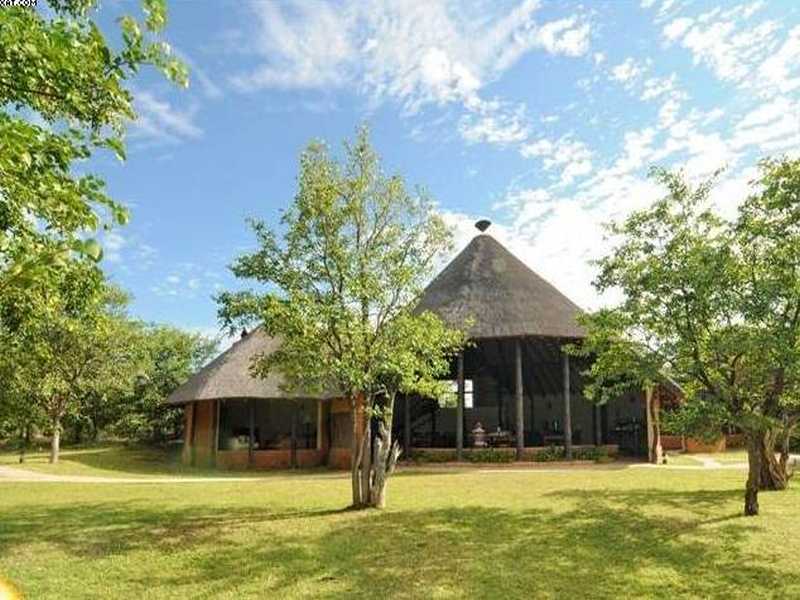 Mopane Bush Lodge is the ideal base for exploration of the Mapungubwe National Park and Cultural Landscape. This exclusive, four star lodge provides gracious living and fine dining with true South African warmth and hospitality. Mopane Bush Lodge is personally managed and hosted by its owners and their management team, constantly ensuring attentive service and an authentic African experience, true to the hallmark of a classic safari… fellowship, fine food and the adventures of the day retold while seated around a flickering hardwood fire.

Mopane Bush Lodge has eight beautifully appointed en-suite chalets, a swimming pool, a licensed bar and magnificent dining room and lounge area. The lodge is situated on its own 6000ha game reserve providing a safe walking and cycling environment.

Mapungubwe National Park and Cultural Landscape is Limpopo’s only World Heritage Site. This evocative and primeval baobab studded landscape forms the backdrop to a magnificent array of San rock art shelters and ancient Bantu archaeological sites where the first African kingdom was established hundreds of years ago. African wildlife abounds here too and the bird diversity is simply breath-taking. It is this landscape that captured the pioneering imagination and was breathlessly whispered of as those first halcyon days of safari began.

The things some people get up to in their retirement are remarkable, a statement of true intrepidity, mixed with a dash of zesty abandon. When Paul and Rosemary Hatty decided to buy a 6 000 ha rather run-down farm in the most northern part of the Limpopo province, instead of a nice bush getaway near Kruger, their Johannesburg friends were… well, somewhat bemused.

“It was sort of a vague decision” is Paul’s bashful answer to the obvious question, to which rosemary laughingly adds that for a businessman he made some pretty vague decisions at the time. Paul admits that, for a production engineer that would normally not spend a penny before a solid bottom line is spelled out in terms of return on the investment, the project was a little ‘topsy‘. But eight years into their venture, the true engineer has resurfaced – the farm is now the factory building and the wildlife they have since stocked the farm with are the machines. But listening to their account of the first giraffe’s arrival on the farm is to hear a very unmechanistic, impassioned commitment to their farm, Mapesu Ranch.

In 1996, when the Hatty’s bought the farm, the consolidation of land for the development of a new National Park that would eventually be the core of a Transfrontier Conservation Area stretching into Botswana and Zimbabwe was a dream. Mapesu Ranch is adjacent to the newly opened Mapungubwe National Park and the World Heritage Site, and lies about seven kilometres south of the Limpopo River, where it forms the boundary with Zimbabwe. The rich findings at the Mapungubwe archaeological site had unearthed important new information about South Africa’s cultural history.

The Limpopo Valley is semi-arid land with an average annual rainfall of about 330mm and the sensitive veld is slow to recover from negative impacts. When the Hatty’s bought the farm, extreme degradation, erosion and bush encroachment were the sad legacy of overgrazing by cattle and goats. Except for a number of nifty old kudu bulls and the odd impala, most of the game on the farm has ended life as biltong. So, the rehabilitation of the farm was not your average retiree’s cup of English tea, except if they had a good dose of pioneering blood in their veins.

Paul’s roots are in Southern Rhodesia of old, where his father, Sir Cyril Hatty, was a member of parliament and cabinet minister during the 1950’s. Spanning three generations, the family’s Zimbabwean history reads like a Wilbur Smith novel. However, the good years and the times of trails and tribulations are not anecdotal. They have moulded a family whose endeavours articulate their heartfelt attachment to Africa.

The initial plans were to establish a safari-style camp on Mapesu, but of course the Hatty’s then decided to do something different. Out of their natural flair for drawing people into their warm circle of friendship crystallized the idea of a special place where friends and guests would be able to gather and ‘kuier’. One thing led to another, so Paul started to pin down some conceptual ideas; their son Christopher found a site with a view; then their nephew Ray designed what he visualised as an African Renaissance style lodge, incorporating the ideas of traditional African living. A concentric design took shape with eight round, en-suite chalets, each with its own kraal stretching out, four on each side, from the central circular buildings and boma.

Under the guidance of Paul and his foreman, Jethro Moyo, construction of the lodge by a team of unskilled workers began early in 2001. Experts were brought in from nearby Musina or Pretoria for specialist work such as the high domed thatched roof of the lounge and dining room. As building proceeded, changes were made to accommodate their philosophy for the lodge. Experiencing the immense silence of the Bushveld weighed heavier than the convenience of having a kitchen near the boma, so the layout was switched around.  Wall and floor finishes underwent several processed to achieve their natural colours and textures while mopane poles of varying lengths shaped the perimeter of the kraals and the outside showers. Twisted mopane branches became beautiful door handles and ostrich eggs were transformed into bathroom lights. A long search for a potter who could interpret the colour, texture and designs of the thirteenth century pottery found at the Mapungubwe archaeological site, took them to the Waterfront in Randburg. These pots became the wall lights in the lounge, while pottery from Zimbabwe became the boma’s hanging lights. A pool and deck with a view over the sea of mopane was added and the lodge was completed just in time for the celestial event of 2001 that would put Musina on the world map.

Friends and family were invited for the big happening: Mopane Bush Lodge’s house-warming festivities and the eclipse. The first official booking came from a French couple who had travelled to many eclipses around the world. They wanted assurance of a hundred percent visibility of the eclipse, so the search was on for the best spot for the event. All astronomical pointers indicated a specific hill in Mapungubwe Park, where they would celebrate the event with a champagne breakfast. But the French, being French, said, “Non, non, you cannot call this champagne, only the French can make the champagne!” But, says Rosemary, ‘Cap Classique breakfast’ just doesn’t sound right. Tasting the bubbly, the Franchman held his glass to the post-eclipse light and produced the final verdict. “Mais oui, this is truly champagne!”

Many interesting guests and memorable occasions have since been recorded in the visitor’s book. Asking about the activities on offer, Paul enthusiastically explains the latest machine in his Mopane Lodge Factory: the Mapungubwe Route. Co-operating with the National Park, a number of establishments have grouped together to promote the variety of accommodation and activities on offer in the area. To name but a few, tracking wild dog in the Venetia Limpopo Nature Reserve; birding in one of South Africa’s best birding areas, walking or cycling the Baobabwe Peace Trail; lunching on succulent crocodile steak at Ratho Crocodile Farm; or immersing oneself in an authentic wilderness experience with Šêbê- Šêbê Wilderness trails. However, says Rosemary, the main idea at Mopane Lodge is just to chill out: to relax and read, enjoy good food and a lovely boma dinner while gazing at the incredible dome of stars and taking leisurely game drives or walks.

Walking along with Paul is to be introduced to the Bushveld through the eyes of a keen observer. He points out spoor of impala, eland, red hartebeest, hyena, and caracal, while relating interesting information about the flora. Most of Mapesu is covered by Mopane, interspersed with Sesame Bush and several varieties of acacia like the endemic Vlei Thorn. The Mopane trees are excellent fodder for most of the game on the farm. In winter, the butterfly-shaped leaves with their prominent veins turn all shades of orange and rust, before dropping to form a mound of nutrition at the foot of each tree. Paul points out the miniscule black droppings of the Mopane worm that also assist in sustaining the trees.

Understanding how the lifecycle of the Mopane worms dovetails into the seasonal rhythms of the trees, brings home the realisation of how infinitely fine the balance of nature is. But to experience this, one must be willing to stand still, to observe and to listen.

Rosemary’s reply to what is special about Mapesu says in words what a million images cannot capture. “It is the peace and tranquillity, the vastness of the bush and the endless dome of the sky. I feel the wonder of creation and an awareness of man’s proper place in the greater scheme of things. It feeds your soul”.