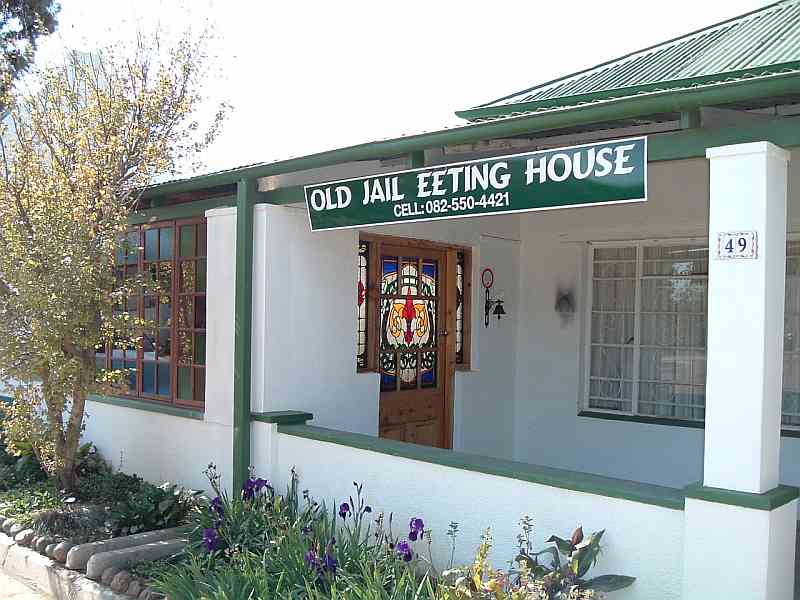 Spend a night in jail!

The jail is situated in Justisie Street right on the upper edge of Philippolis town. At the back of the jail is a trail through real Upper Karoo veld leading to the old Adam Kok Kruithuis.

In jail, guests sleep in an authentic cell 7’x10′ (2mx3m) with 24” (60cm) outer walls and 18” (45cm) inner walls. The cell door is a very sturdy solid wood and steel door with 101 nuts and bolts holding the door together. The cell is virtually sound proof. Guests lock themselves in at night and out in the morning. Full braai (barbeque) facilities are available and the kitchen is also fully equipped with fridge, freezer and stove plus all utensils that one would need. Tea and coffee is always available at ‘no extra charge’. There is good cellphone reception in jail.

When Harry bought the jail in 1998 it was totally derelict after being vacant for 16 years. He however saw and realized the potential of the place as a ‘destination attraction’ and after extensive restoration work the jail is now one of the anchor attractions in town. Right next to the jail, Harry has established Justisie Herberg for those that do not want to stay in jail.  It is the epitome of charm, style and graceful living. It also has a Secret Garden with outside shower.

Since before 1861 Philippolis was a crossroads for dealing in and later on smuggling gunpowder, nitrate and sulphur from the Cape Colony across the Orange River (Gariep). Skirmishes with the Basotho people and the threatening war with England soon necessitated a powder factory and powder-magazine in Philippolis.

A certain James Spirit (Spruit) received the tender to build the existing powder-magazine on the 1 October 1870 at a cost of £75. A lightning conductor and gutters were added at an extra cost of £15. The site for the powder-magazine, however, was a poor choice and led to the fact that is was used by the Free State Government for storing ammunition only until September 1873.

The Philippolis jail was built in 1872 and did duty as a jail for about 70 years.  It then became the local police station for the next thirty years. In this period the police did certain alterations to the jail. Cells were turned into the charge offices – the present day visitors tea rooms.

From 1972 until 1982 the jail did duty as the local army barracks. Once again certain alterations were done to the jail.  Two old cells were changed into a kitchen and one into a shower room.

Then from 1982 up until 1998 the jail stood vacant. From time to time it served the local Voortrekkers, the local civil defence unit, and once it was also the venue for the matric farewell party – they had drinks here before moving on to the town hall. They were led to believe that this was where the party was to be.

Willem Bitter was a local musician who was decapitated in a motorcar accident just outside Philippolis. At that stage the jail was being used as a police station and thus Willem Bitter’s body was brought here. Someone stole Willem Bitter’s violin that night and so today if you hear soft, gentle sad violin music in Jail at night, don’t be alarmed.  It is only Willem Bitter searching for his stolen violin.