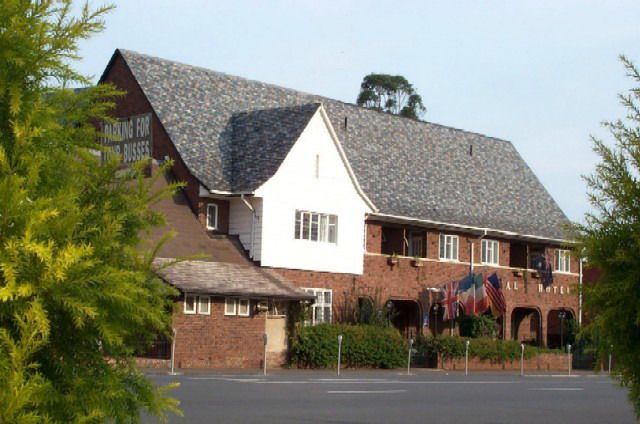 Recently awarded a 3-star grading, The Royal Country Inn combines the benefits of modern accommodation with an old-world charm. Situated in the heart of the battlefields, halfway between Johannesburg and Durban, it is the ideal stopover for weary travellers – a home-from-home with every comfort and amenity, as well as a convenient base from which to explore the rich history of the surrounding area.

The Inn has a total of 26 bedrooms – 21 hotel rooms and five backpacker rooms. The hotel bedrooms all have en-suite bathrooms with showers, satellite television and are fully serviced daily by the housekeeping staff.

The downstairs bedrooms (all with wooden floors and beautifully preserved pressed iron ceilings) open onto a peaceful garden courtyard. From the hotel reception and lounge with magnificent parquet flooring, a sweeping staircase leads guests up to more rooms, some of which have been dedicated to the recipients of the Victoria Cross at the battle of Rorke’s Drift, and some of which have lovely little balconies overlooking Victoria Street and the municipal grounds.

The backpacker rooms are sold at a cheaper rate – two very clean, communal bathrooms service the five backpacker bedrooms. They are comfortable, affordable accommodation for those travelling on a tighter budget.

Originally known as the Royal Hotel, this inn was established in 1886, just four years after the town of Dundee was founded by a Scottish coal miner seeking his fortune and destiny. Together, Dundee and the Royal Hotel built on their foundations, growing together, and today, the Royal Country Inn stands proudly restored to its former glory.

Proprietors, Daniel and Motz Bezuidenhout, bought the Royal in 1999, at a time when the inn appeared more than a touch tired and run-down, a definite ‘fixer-upper’. After five years of hard work, creative energy, and equal amounts of frustration and joy – the Royal Country Inn stands proud once more. Daniel and Motz have, however, been careful throughout its ongoing restoration not to lose the original charm and historical ambience.

The Royal has a rich history – it even burnt down once – and this complex past is an integral part of its atmosphere. The collection of memorabilia, historical documents, old photos and artwork, even replicas of the uniforms of both the Anglo-Boer and the Anglo-Zulu Wars, provides hours of browsing and enjoyment.

The kitchen (Motz’ department) produces meals second to none – packed with flavour and wholesome goodness – dinner at the Royal is not to be missed.

The Royal is proud of their staff – they are friendly, helpful, and pay attention to smaller details sometimes overlooked in large, impersonal hotels. They are always willing to go the extra mile to make your stay comfortable and enjoyable.

Daniel, Motz and their staff extend an invitation to come and sample the wares at the Royal Country Inn!

“History is something we make with each day that passes and you will see this with just one visit to THE ROYAL COUNTRY INN”.