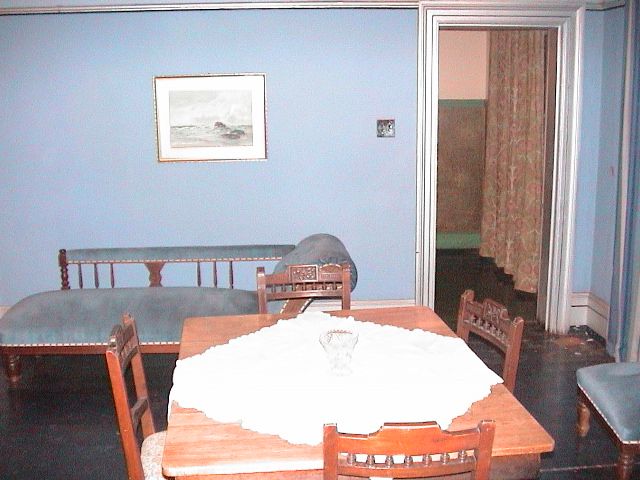 Rudd House was built on Plot 931, following a relatively simple design, during the late 1880’s. Known as ‘The Bungalow’, it originally had only four rooms. In 1888 the property was occupied by William Henry Solomon. It changed hands in 1896 when ‘The Bungalow’ was transferred to Charles Dunnel Rudd.

The restoration of ‘The Bungalow’, under direction of museum staff and the guidance of architect David Yuill, was initially funded by the then Cape Department of Environmental and Nature Conservation. The house was opened to the public in September 1988, when Bevil John Blyth Rudd unveiled the plaque at the door. Subsequent grants from the National Monuments Council have enabled restoration to continue.

Rudd House is situated in Loch Road, Belgravia. To visit the house, contact the McGregor Museum.

The history of Rudd House:

Charles Dunnel Rudd was born in Norlfolk in 1844. He married Frances Chiappini, and their son, Henry Percy Rudd was born on 5 December 1868. C.D. Rudd arrived on the Diamond Fields in 1870, where Cecil John Rhodes, aged 19, joined him in 1871. They became firm friends and business partners, and in 1871, ordered Kimberley’s first ice-making machine. In 1880 the De Beers Mining Company was formed with C.D Rudd as chairman and managing director, and C.J. Rhodes as the company’s first secretary. In 1888 Rhodes founded the amalgamated De Beers Consolidated Mining Company. During October of the same year Rochfort Maguire and Frank ‘Matabele’ Thompson accompanied C.D. Rudd to Bulawayo to obtain from Lobengula, on Rhodes’ behalf, the right to explore for minerals in Matabeleland (later part of Southern Rhodesia, now Zimbabwe). This became known as the Rudd Concession.

Henry Percy Rudd who became owner of ‘The Bungalow’ in 1898, and whose association with the house was the longest, had married Mabel Blythe in 1893. Their son, Bevil Gordon D’Urban Rudd, was born the following year. Bevil Rudd was a Rhodes Scholar from St. Andrew’s, Grahamstown, and in 1920, at the age of 26, won the 400m sprint for South Africa at the Antwerp Olympics. He married Ursula Knight and the two of them lived at ‘The Bungalow’ until 1930. Their son, Bevil John Blyth Rudd, the eldest of four children, was born in the night nursery in 1927. Bevil senior died in the same room in 1948. The house had grown with the Rudd’s, and from its original four-roomed format, it was variously extended, as family needs arose, to its present labyrinthian proportions. Henry Percy Rudd lived on in ‘The Bungalow’ until 1954, when he moved to St. James in Cape Town. In 1933 he had remarried, this time to Emilie ‘Mizi’ Stephanie Poole, of Evilly, France – the former companion to Mrs. Mabel Rudd.

On his death in 1961, HP Rudd left the house to his widow, Emilie, who returned there and stayed until her death in 1963. She in turn left ‘The Bungalow’ to her sister and brother in France, who auctioned off the furniture and other contents, but were unable to sell the house, which stood empty until 1968. It was then that Dr. Richard Liversidge, director of the McGregor Museum at the time, approached De Beers Consolidated Mines Ltd with the proposal that they purchase the house and donate it to the museum.

De Beers agreed and the property was transferred to the McGregor Museum on condition that the museum restores the dwelling house and furnishes it appropriately. Surviving fittings, decorative paintwork and wallpapers of ‘The Bungalow’s’ heyday in the 1920’s made Art Deco the obvious choice.