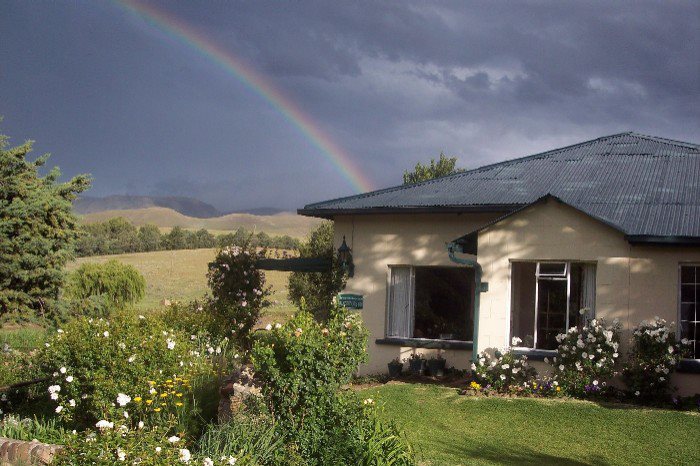 Walkerbouts Inn is located in the village of Rhodes on the southernmost tip of the Drakensberg Mountain range. The entire village was proclaimed a national monument in 1997 to conserve its charm and character.

Walkerbouts Inn has six en-suite bedrooms, a dining room, lounge (with satellite television) and a fully licensed cosy pub. Laundry can be done by arrangement and e-mail, fax and internet facilities are available for guests. Pets are welcome by prior arrangement.

Walkerbouts Inn is also the headquarters of the Wild Trout Association – so it is here that bookings can be made for trout fishing in the area. More than 200km of running water, home to rainbow trout and small mouth yellowfish, is within an hour’s drive of Rhodes. Other activities in and around Rhodes include hiking, mountain biking, horse riding, skiing and birding. Rock art, alpine flowers in summer and 4×4 routes year-round are also on the ‘must do/see’ list.

Locally grown products such as gherkins and herbs are produced at Walkabouts. A ‘bothouse’ (a hot-house built from empty bottles), is used for producing seedlings and a heated tunnel is used for growing vegetables and herbs for our kitchen during the winter months.

Walkerbouts Inn offers a wholesome package of a rural South African experience with fine service and hospitality that has resulted in guests returning year after year, or indeed bringing their friends and extended family for a unique holiday.

Rhodes was officially established in 1891 on the farm Tintern. Legend has it that the town was first known as Rossville, then changed to Rhodes in honour of Cecil John Rhodes in the days when he was perceived to be a politically correct figure. In fact, this legend is incorrect, and the confusion arose because the local Dutch Reformed Church community was referred to as the ‘Rossville ward’.

Another legend is that CJ Rhodes provided the town with an ox-wagon load of pine trees that were then planted in the village. Subsequent investigation has proven that this was not the case as the particular species rarely achieves and age of more than 70 years and many are currently dying out, over 100 hundred years later.

Rhodes and its adjoining township of Zakhele have a permanent population of only around 600 residents.