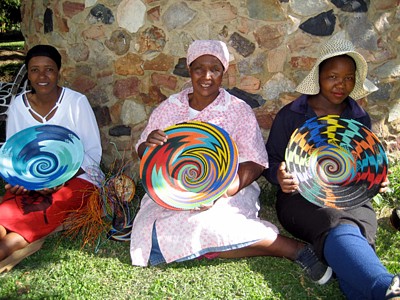 Elandsberg Farm is found some 50km south of Dundee in the northern part of KwaZulu-Natal. When looking out of our window we see the rugged hills of the old Zululand. The farm borders on tribal land; land which the Zulu’s occupied even in the times of the British Empire. Within view to the north-east lie the battlefields of Isandlwana and Rorkes Drift, where the Zulu and British Empires clashed. This area is steeped in history and Zulu culture.

“The Zulus in the area survive on subsistence farming, money sent down from the cities by the few migrant workers who are still able to find work, and on government grants and pensions. Unemployment in this area is put at close to 80%. The poverty and hopelessness of the local community touched and moved us to take action to restore hope and pride to the people.  The idea for Wezandla Crafts came about in 1996″.

“The Zulu word Wezandla, meaning ‘with hands’ was to signify the products made by hand but also the reaching out and helping each other with our hands. Most of the people we wanted to reach (women) are house bound as they have other chores to attend to such as fetching water, collecting firewood, tending to cattle and crops as well as seeing to the family needs. The idea of using their traditional skills to manufacture crafts at home in their spare time came about.
We identified two traditional skills – grass work and beadwork – as our starting point. Soon we realised that these traditional skills were dying out, with only a few of the older generation and the sangomas still acquainted with the techniques. After a short while of delving into traditional beadwork attire (necklaces, bracelets, belts, etc.) we soon realised that the market for these was limited. New techniques and products were designed and the focus moved on the stitching beads directly onto fabric. Many months of training and teaching new techniques of beadwork followed. Shifting the focus to products which needed to be sewn up into clothing or interior accessories, meant that another line of work and a new skill had to be looked at and taught… that of sewing.”

“Now, nine years down the line, Wezandla Crafts has had close on 400 people who have been skilled in various beadwork techniques. Crafters vary from a regular core group, to crafters on the outer edge who produce irregularly depending on other commitments (e.g. the birth of a child, the building of an extra hut, the hoeing of crops). Some crafters have married and moved away and, sadly, some have passed away. AIDS is sadly a factor that is impacting on the lives of too many families.”

“We have also been involved in helping to build a crèche for the community, which we support in a small way financially, as well as with a feeding scheme. All this is in line with keeping to the principles of Wezandla Crafts of using our hands to reach out to others less privileged than us.”

The main focus of Wezandla was providing an opportunity for the local women in beadwork skills. As we worked, the need to address unemployment amongst the men and the youth became ever increasing. An opportunity arose in 2002 to learn the skill of telephone wire weaving which has its origin in traditional grass weaving techniques and would provide the men with a craft skill.

Senzokuhle Wire Co. was formed. The name was suggested by the weavers themselves and reflects the pride they have in using their new-found skill to produce some wonderful pieces. Roughly translated it means ‘well made’.

Senzokuhle has now after just three years taught over 300 people a new marketable skill. Not all of them are active full time, with some only producing while in the area and then going back to the cities to try to find work again. “Our hope is to be able to get sufficient markets in order that the crafters can support themselves and their families on their handiwork.” Already some have grabbed at the opportunity and besides supporting their families are also using their skill to get enough money together to pay lobola (bride price) which usually requires an initial payment of at least two head of cattle. Some of the older boys are using it to help put themselves through school.

“With continued growth, we hope to give the crafters an even greater chance to change their own lives”.

Our vision: To create jobs for underprivileged rural people.