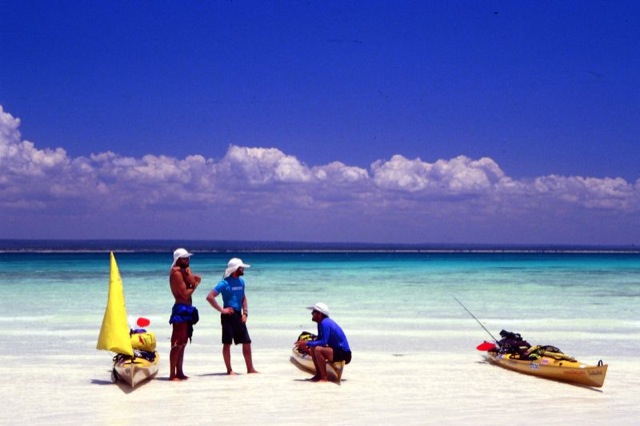 Quissanga, Ilha do Ibo, Ilha Matemo, Ilha das Rolas, Ilha Macaloe, and Pangane. Ibo Island will serve as a main base as it is situated about 10km from the coast and about 80km north of the provincial capital Pemba.  It is about 9km² in size.

Although there is no recommended A to B route for paddling, the area has many day or overnight trips to explore.  For all overnight excursions it is recommended that you take all your provisions with you, especially enough drinking water, sun cream and maps.

The following are a few suggested excursions:

Kayak fishing is a spectacular and fun way to catch yourself a wholesome fish for supper and if you are a fisherman by heart you will love the abundance of sea life and big kingfish, barracuda and mackerel that is on offer in these waters.

How to get there:

The Quirimba Archipelago is situated in the far north of Mozambique. It stretches from the Mozambique/Tanzanian border (Rio Rovuma) in the north, to only 32km (20 miles) north of Pemba in the south. Pemba is the capital of the province of Cabo Delgado and provides most services expected in a small city.

To get to the Quirimba Archipelago one has to go through Pemba. You can fly in to the international airport in Pemba, but you will have to arrange to get your kayaks there by road, or arrange to rent them from either Pemba Beach Hotel or Bela Vista Lodge on Ibo Island.

From Pemba go back west on the main road, until you get to a small village called Sunate. Here take the good tar road north. 83km north of Sunate take the gravel track down to Quissanga from where you will be able to board a dhow to get to Ibo Island.

Ibo Island is an ancient town that was once a major slave trade centre. After the slave trade collapsed, so did the city – and all that is left now are some beautiful but very dilapidated buildings. Some of the buildings have been renovated and turned into guesthouses, such as Bela Vista (which has the only running water on the island). It is possible to buy basic provisions on the island such as pasta, fruit, sugar, maize meal, beer and toiletries. Fresh water from boreholes is also available. There is a Telecommunicatos de Mozambique office where phone calls can be made.

The general pace of life on Ibo is slow and relaxed, offering an escape from reality and the rush of western civilization. Many of the women have a white decorated facemask, which is known as musiro. It is intended to beautify the skin, making it softer and suppler, and remove blemishes. It also serves as a local sun cream and consists of a paste made from crushed ximbuti branches. Children are well educated due to the small school on the island and there is also a great amount of birdlife on the island, such as the lilac breasted roller, the olive bee-eater, the banded martin, the woodland kingfisher and the black crowned night heron.

The most interesting craftsmanship on Ibo Island is the making of unique silver jewellery. Fashioned in the traditional way by silversmiths (often disabled islanders who learn the trade from the elders), observing them is well worth a few hours of your time. If you are really enterprising you can take along some old jewellery, or silver tablespoons and the silversmiths will turn them into the most delicate works of art while you watch. But beware, the silversmiths will melt down your offerings to test that they are really silver! The traditional small dhows which ply in and out of the bay are also well worth your attention. Try to arrange a sail whilst you’re there for an unforgettable experience.

The Portuguese arrived in the archipelago in the beginning of the l6th century, and it was fortified as early as 1609.  When the Portuguese lost domination over the northern East African coast and the sea route to India in the 17th century, they were in search of new ports to sustain the trade on the Mozambican coast.  The Quirimba archipelago naturally became one of them and by the late 18th century Ibo became the most important town in Mozambique after Ilha de Mozambique.

Ibo is the most well known island in the Quirimba’s. Primarily an export point, Ibo was a slave trading post, boosted by the demands of French sugar plantation owners on Mauritius and elsewhere. Initially Quirimba Island was the capital of the archipelago, but due to attacks from the Arab sultanate of Zanzibar the capital was moved to Ibo Island – which, by the late 19th century, served as headquarters for the Niassa Company which was later relocated to Pemba.

In 1791 the S. Joao Baptista Fortress was constructed and in the beginning of the 19th century the two smaller fortresses St. Antonio and S. Jos. In 1891 the Cabo Delgado province became part of the Niassa Company, which maintained Ibo as its capital. In 1929 the capital was transferred to Porto Amila (now Pemba).

The Quirimba Archipelago is rich in religious, commercial and residential ruins from this time of great economic activity. On Ibo the remains of the fortresses and the church interact together with the urban nucleus showing architectural influences from Arabia, Persia, India and Europe.