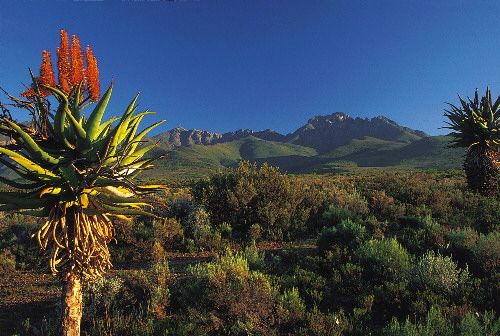 The Khoisan, who left their art in its caves, gave it their name: Kammanassie, ‘Mountain of Water’. Should we only ever look upon mountains as things to climb or to study? Or should we imbue them with something of the catacomb, precious and revered? For catchments they remain and if we cannot look after our water sources, what will we look after?

Kammanassie Nature Reserve receives rain throughout the year, an average of about 600mm. And it is this that helps sustain the small herd of endangered Cape mountain zebra, which are greatly dependent on water. These beautiful animals were shot nearly to extinction throughout the region in earlier times, often only as meat for servants.  Kammanassie’s population are descendants of the original herd that ran on this mountain. They are described as a pure gene pool, that is, none have been introduced from elsewhere to bolster their survival. There are frouty animals here now, whereas in the 1970’s there were six.

Kammanassie Nature Reserve has a self-catering guesthouse in Uniondale, a few kilometres from the reserve. It sleeps 10 people in four rooms (bedding provided), has a kitchen with a fridge, a stove and its own cutlery and crockery. It has a bathroom/shower and a second separate shower/toilet. With this as a base, one can explore the reserve and the region. Day trips to Baviaanskloof, Oudtshoorn, George, Plettenberg Bay and Knysna are possible from here. The house is next door to the reserve office, from where you can get your reserve entry permit.

The reserve has no overnight hiking, but it does have two fantastic day hikes. It is on these trails that walkers are likely to come across the Kammanassie cone bush (endemic to the reserve), klipspringer, duiker, grysbok, rhebuck, kudu and mountain reedbuck, not to mention baboons.

The nearby Millwood Nature Reserve has the 27km 4×4 Bay-to-Bay View Route with views to beat all views. Although it is not actually on Kammanassie, the reserve falls under CapeNature management. A maximum of three vehicles are allowed on this route, which can be done as a two-day trail or in a day.

Africa’s stripy wild horses have never known a stable door and, until recent times, never knew confinement either.  They roamed the hills and grassy plains in great herds and, when migrating to water, in even vaster herds. Today, however, they are only found in significant numbers in larger African nature reserves.

But common to all zebra are these animals’ more peculiar traits – their hysterical whinny, their podginess and their ability to appear dark or pale, depending on the light.