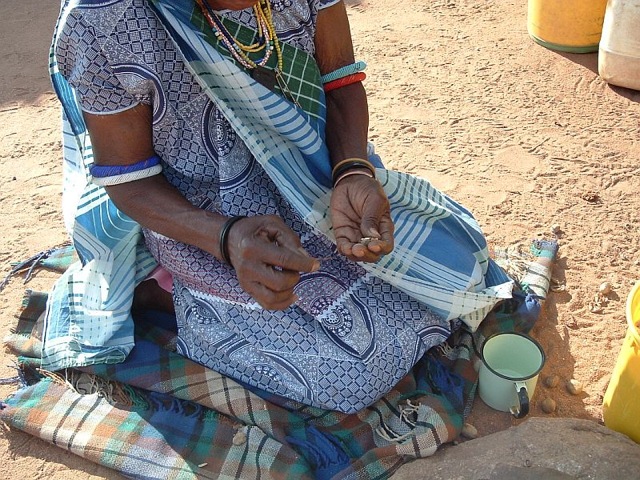 Moyahabo makes snacks out of marula nuts as a way to keep her hands busy. She collects Marula fruit during February until March, which is when they ripen. After collecting the fruit she makes beer in order to retrieve the nuts from the inside of the Marula. The nuts are then dried, after which she cracks them to retrieve an ‘almond-like’ substance on the inside. She extracts the pieces carefully and it takes her two days to fill a ceramic cup with this snack.

The outer shell is used as an ingredient for snuff, which, it is believed, will stop a running nose and relieve headaches.

The snacks are called Dikgeru.

Other uses for the Marula:

Oil can also be extracted from the Marula ‘nut‘, and it is then mixed with Letsouka, which is a reddish stone powder. This is used as a mask (beauty product). This reddish oil is also used in a traditional ritual, where virgins apply this mixture to their bodies in a ceremony where they are pronounced ready for mixing with men. The girls are decorated – their head with ash of the Leadwood tree and their foreheads and bodies with the reddish oil. They then dance and sing through the night, without any clothes on. Thus the Marula has a lot of symbolism in the cultures of the people in Blouberg.

The shells can also be used to make fires, or the snack can be roasted.

The bark of the Marula branch is also used to make a dish/bowel called mogopo. This is used to eat porridge from and is seen as a very good product, since the tree drew up water from its roots and the bowel carries this living character.