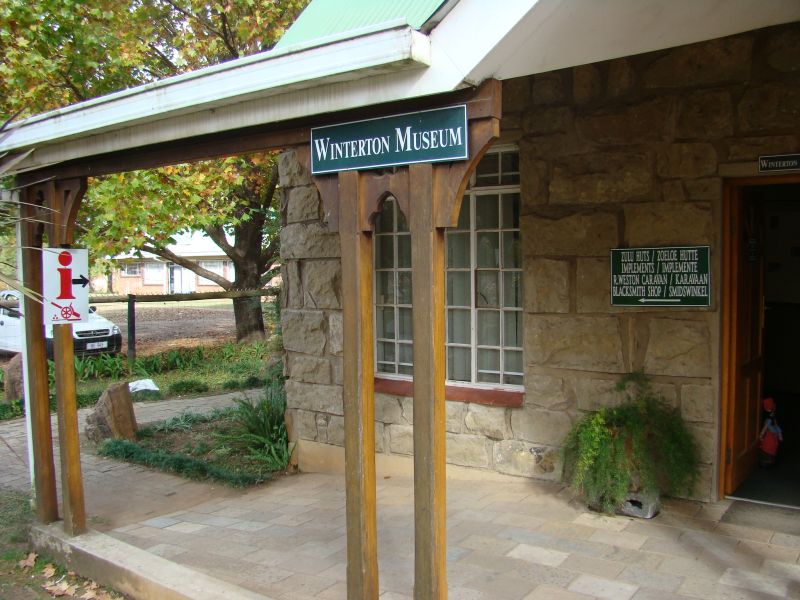 The Drakensberg is one of South Africa’s most outstanding attractions, which draws hundreds of thousands of visitors annually to its scenic beauty, crisp mountain air and crystal clear waters.

In the middle of this beautiful area is the Winterton Museum. It was officially opened in 1993 by Sheila Henderson and is certainly worth a visit.

This is a community museum and represents living history, telling a story of the people in the area – past and present. Everyone is there: the people from the early and late Stone Age, Iron Age, the San, the people who fled from Shaka’s invading armies during the Mfecane, the first white people, the Voortrekkers and early English settlers. Part of the joy of this museum is that you can walk out into the street and meet a descendant of one of the folk whose photographs you saw inside.

Local Ngwane people built huts next to the museum, using materials they collected themselves the way their ancestors did. Farmers in the district donated old farm implements used by their forefathers. Remember the beautiful book on the Drakensberg called Barrier of Spears, by Reg Pearse? Reg’s son Malcolm was commissioned to photograph all the known San rock art in the area. Together with other San artefacts, this exhibit is a huge success.

Carel Hollenbach donated an outstanding private collection of Boer War books to the museum. If you are planning on visiting the battlefields while you are in the area, make use of the reading room to brush up on some facts. Many battlefield guides have used these same books.

Then there is the blacksmith shop, complete with tools and equipment and the Weston Caravan. Maxmillian John Ludwich Weston designed many electrical and mechanical devices for which he held world patent rights and wrote several books. Assisted by his cousin, he put the first electric lights into the Paris Opera House and became the first man in South Africa to build a powered flying machine.

For the caravan on display he bought a truck chassis, a 1918 model Commerce, and built the caravan onto it. The family toured from Cape Town through Africa and Europe, including Italy, Bulgaria, Czechoslovakia and Greece, before settling in the area in 1933.

The museum is visited by many tourists, tour companies and school groups.