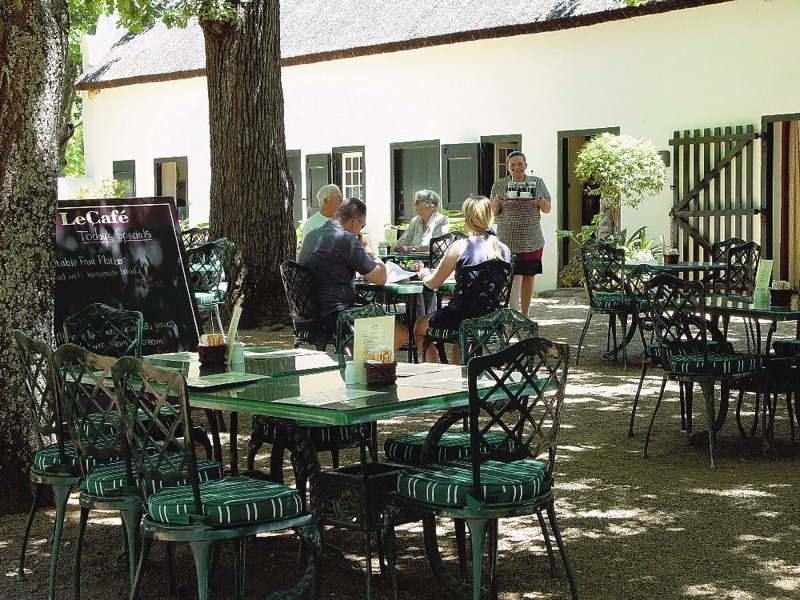 Less than an hours drive from Cape Town, nestled at the foot of the Groot Drakenstein Mountains, stands Boschendal, whose proud French heritage dates back to 1685.

This historic manor house stands as a monument to this rich cultural tradition. The vineyards that stretch high on the cool eastern slopes of the mountains are planted with noble varieties, which produce highly prized wines characterised by their elegance and complexity. The Cape, well known for its superb hospitality is reflected in the facilities on offer to visitors to Boschendal.

Boschendal staff were and still are housed at Lanquedoc – a historical collection of houses built by architect Sir Herbert Baker.

For those who prefer a more simple meal in the open air, there is Boschendal’s Le Pique-Nique. As the name suggests, the style is very French. Burgundy umbrellas are jauntily set above tables covered with cloths of green and burgundy. From hand-woven picnic baskets lined with cheerful cloths, emerge freshly baked baguettes and a tempting collation of home-made pâtés, cold meats, salads, cheeses and biscuits. A dessert creation and hot filter coffee is served from the gazebo.

Situated in the original cellar of the Boschendal Manor House, this restaurant serves delectable Cape-French buffet luncheons every day of the week. Guests are welcomed in the reception area with a glass of sherry or grape juice and a magnificent display of fresh proteas – all picked on the farm. The restaurant is slightly elevated from the reception area and is air-conditioned in summer and warmed in winter.

The yellow-wood tables groan under the weight of eye-catching, mouth watering dishes, which are expertly prepared by the kitchen brigade. The tantalising treats are perfectly complimented by Boschendal’s finest wines. Included in the wine list are descriptions of more than twenty local cheeses presented on the cheese table. Complimented with fresh and dried fruit and preserves, we suggest visitors try the ‘French way’ and enjoy your cheese before moving on to the sinful desserts.

Beautifully restored and well-appointed, this is the idea place to build a lasting memory of Cape Culture – unspoilt surroundings, sumptuous food, fine wine and timelessness.

Nestled in the original slave quarters of the Boschendal Manor House, Le Café has the ideal setting in the balmy summer months to enjoy anything from the best home-made scones in the valley to garden-fresh salads and baguettes topped with adventurous fillings. In winter, the menu changes its focus so that patrons can tuck into wholesome casseroles and warm traditional dishes. With a glass of Boschendal’s finest sparkling wine in the dappled shade of the ancient oak tree; or near a cosy log fire with a cup of steamy hot chocolate – any season is a pleasure at Le Café.

A visit to Boschendal is always enjoyable and memorable. A wide variety of gifts are available from the Waenhuiswinkel (which means ‘coach house shop’) as reminders of a pleasurable experience. It is a veritable cornucopia spilling over with things old and new – glassware, pottery, locally made beeswax candles, brass- and copperware, original watercolours, home-made confectionery, needlework and much more.

Here visitors to Boschendal are able to taste and purchase wines in the pleasant surrounds of the Taphuis – situated close to the Manor House and a short distance from the winery. Visitors may sit inside or outside under the shade of the giant oak tree to savour their Boschendal wines. Experienced and knowledgeable assistants are in attendance to answer any wine-related questions. Conducted tours of the vineyards and wine cellars take place twice daily at 10:30 and 11:30 during the summer months.

The history of Boschendal:

The farm Boschendal (which means ‘wood and dale’) was granted to French Huguenot Jean Le Long in 1685 by Governor Simon van der Stel. A fellow Huguenot, Abraham de Villiers, bought it in 1715 together with adjacent land belonging to Nicolas de Lanoy – both farms were 60 morgen (51ha) each.

The de Villiers family proved to be successful farmers, acquiring several farms in the area. Abraham’s line of the family died out, leaving the farm Boschendal in the hands of his brother Jacques (who bought the farm from him in 1717). Jacques and his decedents are responsible for the existing buildings at Boschendal – Jean de Villiers (Jacques’s son) for the wine cellar and coach house, and his youngest son, Paul, for the homestead as it now stands.

Frank Robb (a later edition to the syndicate) interested Anglo-American Corporation (formed by Sir Ernest Oppenheimer in 1917 to become one of the largest trans-national conglomerates in the world), De Beers and Rand Selection Corporation Ltd in becoming majority shareholders in Rhodes Fruit Farms in 1969.

Under the chairmanship of WJ Héfer, the board decided to restore Boschendal. The architect, Gawie Fagan, restored the homestead and outbuildings, converting the wine-cellar into a restaurant and laid out an old rose garden. The complex was opened to the public in 1976. The manor house is authentic in every detail and contains many treasures – including an important collection of Ming porcelain.