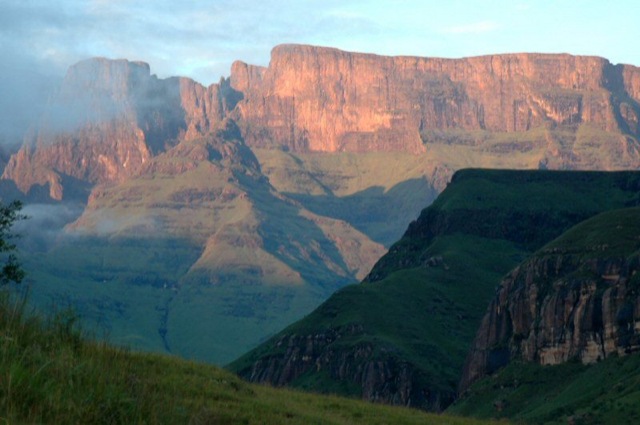 The Drakensberg Experience is located in the midlands of the Kwazulu-Natal Province of South Africa. The route is centred on the Drakensberg World Heritage Site, which includes Giants Castle and the Central and Northern Drakensberg. The route starts at Hidcote in the South, to Sterkfontein Dam in the North, including towns such as Estcourt, Winterton, Bergville, Weenen and Geluksburg, covering the area up to but not including the towns of Colenso and Ladysmith.

Known to the Zulu people as UKhahlamba, or ‘Barrier of Spears’, the Mountains of the Dragon (Drakensberg) provide a magnificent semi-circular border between KwaZulu-Natal and the inland mountain kingdom of Lesotho. The watershed of the basalt peaks divide the rain and snow, some flowing westwards over the alpine plateau of Lesotho towards the Atlantic Ocean, and some down the vertical slopes into KwaZulu-Natal, toward the warm Indian Ocean.

This 200km long mountain range has witnessed many historical events in South Africa’s history. The San people were probably the first to gaze upon its magnificence, but they tragically disappeared in the late 19th century, leaving only engraved rock walls and artefacts to remember them by. The same range was also the western boundary of the mighty Zulu Kingdom who encountered the Boer settlers around 1837 on their Great Trek from the Cape Colony to undiscovered lands. The name Drakensberg was only coined forty years later however, when a Boer father and son reported seeing a dragon (a giant lizard with wings and a tail) flying high above the cloud-shrouded mountain peaks.

The inscription in late 2000 of uKhahlamba-Drakensberg Park as a World Heritage Site brought long-overdue recognition of its universal value to mankind. Meeting the criteria for both natural and cultural listings, the site can now officially boast unique richness of biological diversity, the conservation of all-important endemic and threatened species and displays masterpieces of human creative genius in the form of 35 000 San rock art images. Rolling high altitude grasslands, pristine steep-sided river valleys and rocky gorges also contribute to the beauty of this World Heritage Site.

The Berg – as it’s popularly known – is also known for the world’s second highest waterfall, the Tugela Falls. The falls are located in the Royal Natal National Park (part of the uKhahlamba Drakensberg Park) and are easily viewed after heavy rain from the main road into the park.

Apart from the Royal Natal Drakensberg Park, the area has a number of game reserves. The Weenen Game Reserve has a growing reputation as a small but superbly appointed wildlife destination accessible for both day and overnight visitors.

Both black and white rhino have been introduced since the 5 000 hectare reserve was proclaimed in 1974. Other re-introduced game includes giraffe, buffalo, red hartebeest, eland, zebra, klipspringer, ostrich, common reedbuck, and roan antelope. Other species which have decolonised the area include grey duiker, bushbuck, steenbuck, black-backed jackal, hyena and mountain reedbuck. The reserve has more than 251 bird species, making it popular with birders.

Steeped in Anglo Boer War history, the Spioenkop Nature Reserve boasts a rich selection of wildlife including white rhinoceros, giraffe and a variety of plains and bushveld antelope. The Spioenkop Dam also offers opportunities for a variety of watersports.

The Wagendrift Nature Reserve located just outside Estcourt takes its name from a drift through the Bushmans River that was used by transport wagons on their way from Port Natal to the goldfields of the Witwatersrand. The reserve is a 980 hectare protected area that incorporates Moor Park Reserve and surrounds the Wagendrift dam. The New Formosa Reserve is also located in close proximity to Estcourt and is also known for bird-watching.  New Formosa also has a number of short hiking trails.

Giant’s Castle Game Reserve was named to signify the peaks of the Drakensberg Mountains, whose silhouette resembles that of a sleeping giant. Giant’s Castle is surrounded by deep valleys, grassy plateaus and craggy mountains, offering panoramic views for hikers and mountain climbers.

Visitors can enjoy fascinating sightings of ancient rock art, created by the historic San people that once inhabited this spectacular area. Another highlight is the reserve’s renowned Vulture Restaurant, where guests can enjoy delicious cuisine while viewing bearded vultures and other endangered species feeding.

The Kwazulu-Natal Midlands are also known for the many battles that have taken place here and offer many opportunities to re-discover the remnants of British, Zulu and Boer clashes.

Some of the sites that can be visited in the area include:

For more information on these and other battlefields visit the Kwazulu-Natal Tourism website.