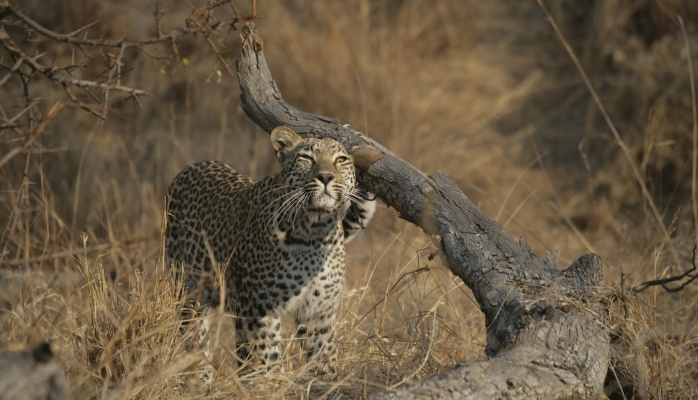 Lion Sands Private Game Reserve is located in the famous Sabi Sand Reserve and forms part of the greater Kruger National Park. With unfenced borders, wildlife exists in its purest form roaming freely across the magnificent African landscape. This pristine stretch of land has been passed down four generations and as such the Lion Sands family has developed a sincere commitment to the conservation of land and wildlife. With a business philosophy based on sharing rather than ownership and sustainability rather than profit, Lion Sands Game Reserve promises to share unforgettable memories of the untouched African bush.

Lion Sands is part of the Open Africa Safari Collection, a selection of hand-picked safari lodges that are committed to the conservation of African wildlife, the environment and the development of local communities while offering authentic big game safari experiences. All our partners share revenue with Open Africa (at no extra cost to the traveller) thereby empowering you to be a responsible tourist. For enquiries and bookings please e-mail bronwen@openafrica.org.

Lion Sands Game Reserve is located in South Africa’s beautiful Lowveld region – a region which now forms part of the oldest private game reserve in South Africa, and which is also part of the largest conservation area in southern Africa. Lion Sands offers the best in close-up viewing of African wildlife, and presents guests with thrilling photographic opportunities beyond compare. Guests at Lion Sands can spend up to 6 hours in the bush per day watching the landscape come to life as the day breaks, and savouring the African sunset while creatures of the night begin to stir. Game highlights include the Big 5 – lion, elephant, buffalo, rhino and leopard, as well as cheetah, zebra and giraffe.

Lion Sands Game Reserve offers the best in Big 5 African safaris – lion, elephant, leopard, rhino, and buffalo can all be viewed as well as a multitude of other exciting African wildlife including cheetah, hyena, wild dog, zebra, giraffe and a myriad of antelope.

There is an abundance of wildlife with over 200 different species, and this is not including the abundance of birdlife making for an ornithologists dream. Guests are taken out twice daily on open safari vehicles, spending up to 6 hours per day in the bush experiencing the thrill of close-up game-viewing, and unrivalled opportunities to capture that game on film.

The 1920 gold rush in South Africa brought many immigrants to our shores, including Guy Aubrey Chalkey who would later purchase a portion of what is now Sabi Sand Reserve. Chalkey established a successful stock-broking firm and in 1933 he purchased the Kingston property bordering Kruger National Park. Prior to 1926 extensive hunting was taking place across the continent; however in 1926 the National Parks Act was passed in South Africa and administered the country’s first hunting regulations. The legislation also provided for the creation of the Kruger National Park, the sole purpose of which was, and still is, nature conservation.  Land to the west became open to private ownership and many, including Chalkey, took up this opportunity to enjoy the untouched African wilderness.

first camp was established on the banks of the Sabie River in the late 1930s and was used as a private retreat for family and friends for over 60 years. The property passed down four generations to the More brothers who opened River Lodge and Bush Lodge in 1978. In 2000 drastic damage to the lodges was caused by flooding of the Sabie River; however the family business came back stronger under the Lion Sands brand. Today, this family owned and operated game reserve holds a strong policy of conservation and ethical wildlife management, born of a long history with the land. Since its inception in 1978 there has been no commercial hunting – following in the footsteps of Chalkey who never killed an animal on the property.

10 Species of bat identified at Sabie Sand are on the endangered list, as well as two bird species – the Oxpecker, which combs the hosts hair for ticks, and the Ground Hornbill, of which there are less than 1500 left in South Africa.

Lion Sands Game Reserve forms part of the largest conservation area in Southern Africa. This section of pristine land has remained uninterrupted throughout the ages, and it is essential that this remains the case. Nature exists in a delicate balance and its utilization for commercial purposes requires that ecosystems are vigilantly monitored and managed. To ensure that this is done, Lion Sands has employed a full time ecologist.

Routine tasks that are carried out at Lion Sands are maintenance of roads, wetland systems and firebreaks for the fire season. Eradication of alien vegetation is also carried out in compliance with the Conservation of Agricultural Resources Act. Monitoring of wildlife and habitat densities is continuous, as too is the anti-poaching unit.

Lion Sands Private Game Reserve does not exist in isolation, but rather it shares a relationship with the local community geared toward mutual benefit and social development that is sustainable and eco-friendly.

Arising out of a need for foundation education and healthy meals for local children, the Henna Pre-School was founded in 1991 and started with 20 pupils.

With help from Lion Sands the pre-school has grown considerably and now accommodates 250 children. Some of the major projects thus far have been the construction of classrooms, renovation of the kitchen, and setting up borehole water for the school. Lion Sands is also the proud host of the annual graduation ceremony for the children, which hopes to instill within them the importance of knowledge and education.

Lion Sands has united with both the government and the community in the fight against HIV/AIDS. The reserve provides support to its employees as per government regulations, as well as to the Huntington Home Based Care Initiative. Guests at Lion Sands are given an option to tour the local community and are encouraged to make a donation to this worthy cause. Lion Sands is also involved in the annual activities held on World AIDS Day in which HIV orphans and other vulnerable children from the community are given food parcels and school goodies. The day also includes educational talks which are essential to creating awareness and a better understanding of the HI Virus.

This luxury safari lodge was named as a tribute to Guy Aubrey Chalkey who purchased the property in 1933, and spent many of his days in the same spot where the lodge was erected in 2007. The lodge is essentially a home away from home, and was designed by the More family to provide luxury accommodation for friends and families from across the globe.

Set in a secluded area on the banks of the Sabi River, this safari homestead has four luxury suites (accommodating up to eight adults), each suite having its own private view of the river. The children’s dormitory accommodates eight children, and has an inter-leading bedroom for an au-pair. Guests are also treated to the convenience of a private chef and game ranger. A sumptuous lounge and living area combined with open plan kitchen and dining area provides space for a relaxing and social safari holiday. The décor is an opulent blend of modern simplicity, classic style and earthy Africa, with soft and neutral colours to emphasise the surrounding bushveld viewed through the many large windows and sliding doors.

Please note: Children five years and younger stay free of charge. Children between the ages of six and 15 pay 50% of the per person adult rate and those 16 years and older pay the full adult rate.

The Lion Sands Ivory Lodge has won numerous international awards, and has some of the world’s finest villas for the ultimate in an exclusive and luxurious African safari experience. Public facilities include a cozy bar with a fireplace; sumptuous library lounge; wine cellar; viewing decks including the River Island Deck on the Sabi River; Lalamuka Health Spa and gym; indoor and outdoor dining facilities; and curio shop.

Perfect for private romantic getaways, each villa is furnished with ebony and ivory inspired décor and includes a living area, private viewing deck and heated plunge pool. Enjoy the outdoor shower and take in the incredible views from your private suite before enjoying a dinner by candlelight in the outside boma.

Rates from R11490 per person per night sharing.

River Lodge is set on the banks of the Sabi River and catches the morning sun as it rises in the east. This is the oldest lodge at the reserve with a family of staff who create a warm and friendly environment for the best in African safari accommodation. Amidst a shady knoll that is home to trees some 800 years of age, the River Lodge provides a cool respite from the African sun, and a tranquil space to relax and unwind to the soft murmurs of the river.

Rates from R6240 per person per night sharing.