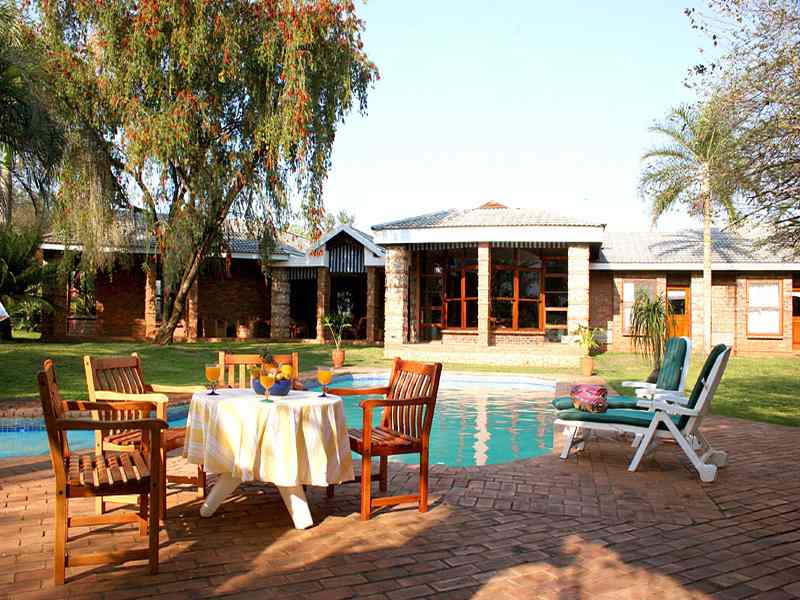 Tamboti Ridge Cottage is situated in a lovely sub-tropical garden with a breathtaking view up the Pongola River. It is ideally loc... 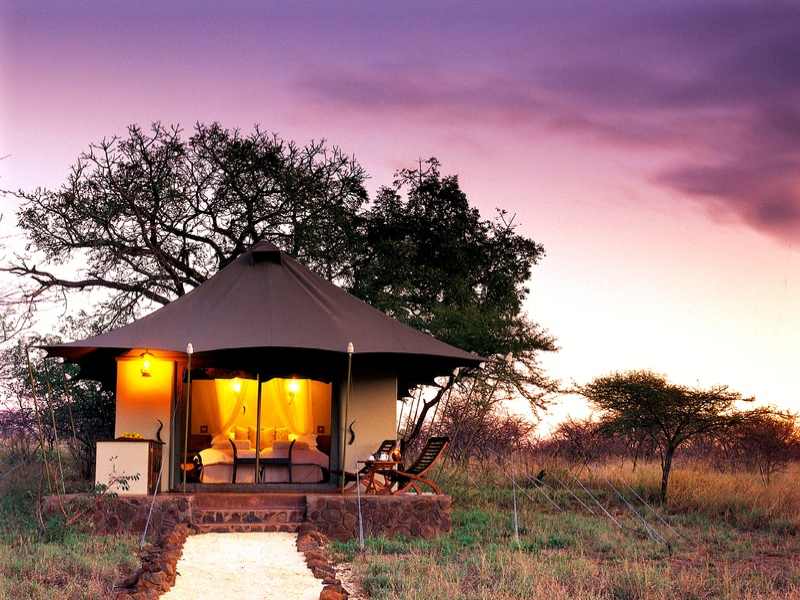 Pongola Game Reserve is home to four of the ‘big five’ species and is a consolidation of privately owned land totallin...

Northern KwaZulu-Natal has many natural and splendid beauties, but little can compare with the superb wildlife to be seen on the s...

Shayamoya (meaning ‘song of the African breeze’) meets the needs of every family member as it has a variety of wildlif...

Pakamisa Lodge is a small upmarket hotel offering eight luxury suites situated on the top of Pakamisa Mountain amidst the 2500ha p...

"Whether your interests lie in game viewing, birding, fishing or even just chilling – sipping at your wine, counting the war...

The Mkuze Falls Game Lodge is located along the northern bank of the Mkuze River, in the heart of KwaZulu-Natal.  Overlooking...

To most travellers, the village of Pongola is only a small dot on the N2 national highway on the way to Mozambique or Swaziland.&n...

La Rone Cottage's quiet tranquillity creates the impression of being out in the country. The cottage has panoramic views of t...

Vintcent and Cathering have been doing pottery for about twenty years - six of these in Pongola, KwaZulu-Natal. The pottery worksh...

“From the moment man erected fences he placed upon himself the burden of managing the land and its wildlife.  He also f...

The Erlanks tell the story of Junk Shopping Centre in their own words:“For twenty years we had two small shops that suppleme...

“I had a farm in Africa… the geographical position and height of the land combined to create a landscape that had not its like in all the world. There was no fat on it and no luxuriance anywhere; it was Africa distilled … the views were immensely wide. Everything that you saw made for the greatness and freedom, an unequalled nobility … you woke up in the morning and thought: Here I am, where I ought to be.”

Although Karen Blixon’s Out of Africa farm was located in Kenya, her description of the land can apply to just about anywhere on this magnificent continent. In particular, however, the description seems to ring true for Zululand, the northern part of the KwaZulu-Natal province of South Africa. But perhaps here there is a little more ‘luxuriance‘ than Karen Blixen experienced which a trip along the uPhongolo Route will prove.

The area the uPhongolo Route covers is a land of game parks and private reserves, of sugar plantations and mills, and of small country towns. The route touches on the Swaziland border to the north, making an interesting mix of cultures within a small area – Zulu, Swazi, English and Afrikaans people all live and work here.

The route offers a mix of luxurious and fairly rough-and-ready accommodation, from 5-star lodges and upmarket tented camps to country guesthouses or even campsites.

Activities on the route are varied enough to suit the whole family. Hiking, fishing, hunting, golfing, game drives, guided game walks and horse riding are common activities offered on this route. But for those wanting something a little different – try elephanting, hyaenaring or rhino tracking; a trip through the local township to visit a sangoma; visits to local crafters; canoeing, or a sundowner cruise on Lake Jozini.

The uPhongolo Route has so much to offer anyone with a few days or more.

The history of the uPhongolo region:

The Lebombo Mountains of this area mark the southern starting point of the Great Rift Valley, which crawls northwards until it loses itself in central Africa. To the eye, the Lebombos resemble a wall rising about 600m above the plains to an almost level summit. This 5km wide summit, in contrast to the plains below, has a relatively cool and humidity-free climate, and so was the preferred place of abode for several indigenous peoples and early settlers from Europe. This ridge is composed of basalt, which used to cover the entire surface of KwaZulu-Natal about 150-million years ago.

Massive erosion over the years has destroyed most of the basalt layer, leaving only the Lebombos and the Drakensberg. Interestingly, about 60-million years ago, the sea flooded the plains of Maputaland and the eastern cliffs of the Lebombos lay along the shoreline. Seashell fossils can still be found on the lower slopes of these mountains.

One of the most important archaeological sites in Southern Africa is situated on the western face of the Lebombos. Known as Border Cave, the site was first excavated in 1934 by Professor RA Dart. Over the years, more that 69 000 Stone Age implements have been unearthed, as well as the remains of five Homo sapiens which date back to 100 000BC, making them some of the oldest remains of modern humans yet found.

Amongst the fossils uncovered are the remains of seals, dolphins, even whales. Bones of mammal species such as leopard, elephant, rhino, hippo, Cape buffalo, nyala, kudu, eland and three extinct species (the giant Cape horse, a hartebeest-like animal, and Bond’s springbuck) have also been excavated here.

The spectacular Lebombo Mountains and the plains below them were, from ancient times, wild and uninhabited except for the thousands of animals that migrated over the vast tracts of land. But in the 1800’s the mountains began to reverberate with the sounds of change and humans.

Two great events in Zulu history played out in these mountains. In 1840, after ruling the Zulu nation for 12 years, the Zulu King Dingane was defeated by his brother, Mpande, who was in alliance with the Boers. Dingane fled across the Pongola River and sought refuge in the Lebombos, but was murdered by the Nyawo tribe. Apparently the murder was a mistake and a source of great consternation to the Nyawos. Until recently, the exact location of Dingane’s grave had been a matter that the local people (descendants of the Nyawo) did not discuss.

After the Anglo-Zulu war of 1879, the British divided Zululand into thirteen separate states with their own rulers, introducing a period of chaotic rivalry, feuding and fighting between them. In 1884, the final battle – the Battle of Ghost Mountain – between two principal rivals of different ‘states‘, Dinizulu (Cetshwayo’s successor) and Zibebhu (head of the Mandlakazi section of the Zulu nation), took place.

Zibebhu’s army was considered to comprise the finest Zulu warriors, but he had little chance against his enemy, especially as Dinizulu recruited well-armed Boer mercenaries. The battle continued in the bush, on the slopes of the mountain, and down the course of the river. Eventually the Mandlakazi fled through the gorge and so ended the battle of Ghost Mountain – leaving the battlefield littered with thousands of bodies. Even today the occasional human bone can be found here.

It was during the 1800s that the advance of white settlers began. European missionaries and great white hunters “equipped with a child’s dream and a man’s courage” opened up a ‘new‘ continent to the western world. With this advance of ‘civilisation‘ began the removal of game. Although Maputaland had by now earned a reputation as an unhealthy, fever-ridden land, the vast herds of game attracted hunters and adventurers. Those who survived malaria and blackwater fever could make considerable fortunes from the sale of ivory. One hunter, George Shadwell, shot 150 elephants and 91 hippopotami in one season!

By the 1880’s, however, it had become evident that game was becoming scarcer due to indiscriminate shooting, habitat deterioration and increasing human population pressures. On June 13 1894, President Paul Kruger proclaimed the Pongola Game Reserve; it was to be the first game reserve in Africa). It was an area that was largely inhospitable for human settlement and agriculture, but also provided a strip to access the ports in Mozambique for the Transvaal Boers – who were otherwise cut off from the sea by the British colony of Natal. The proclamation was therefore more of a political manoeuvre at the time than in the interests of conservation.

After the Union of South Africa was declared in 1910, the area was thrown open to hunting in a mistaken attempt to rid the it of game and therefore the tsetse fly – the harbourer of nagana (a livestock disease). Soon after World War I, many farms were allocated to returned soldiers. Their cattle died from nagana and the cry of ‘kill the game’ continued. The reserve was de-proclaimed in 1921. The hunting continued, until eventually the use of the insecticide DDT was instigated to control the tsetse fly, which it successfully did.

Air access: SA Express operates daily scheduled flights from Johannesburg to Richards Bay airport. Private air charters can be arranged from Durban to the nearby town of Mkuze. Many of the private lodges in the area have their own airstrips and helipads.

Climate: Zululand and Maputaland are situated in the subtropical zone of Southern Africa. Midday temperatures during the summer (October to March) can be scorching, reaching 40°C. Winter (May to August) is moderate, with minimum temperatures of about 10°C. During the summer months cool cotton clothing is advisable as well as rain jackets for the regular afternoon thunderstorms. Jerseys and pullovers are recommended for the winter months. Hats and sunscreen are essential all year round.

Malaria: The uPhongolo Route is a low risk malaria area. However, guests travelling via Mpumalanga or Swaziland are advised to take precautions against malaria. Travellers are advised to consult their doctor or pharmacist regarding anti-malarial prophylactics.

Fishing – this is a wonderful time to catch large fish. The waters of the Jozini Lake become clearer in February. The best chance for catching tiger fish is with live bait or chicken livers.

Birding – exceptional at this time of year. Weaver and quelea colonies are nesting, attracting many raptors and cuckoos. Many waterfowl and game birds are also around, following good summer rains characteristic of this area.

Game – excellent, especially rutting displays of impala males.April is one of the best months in the year for game viewing.

Climate – Excellent, clear and windless days – the best time of the year.

Fishing – not the easiest time of year to fish. Tiger fish are not active or feeding. They start to liven up around August.

Birding – winter species appearing with flocks of guinea and water fowl along the lake shore.

Game – excellent sightings as the veld is dry and open, with game moving around looking for food. The shoreline is the best place for viewing game as it is attracted by the long, green grass.

Game – excellent, viewing of crocodile and game along shoreline. South Africa - KwaZulu-Natal
A route of luxury game farms and community projects in northern KwaZulu-Natal near the Swaziland border.